So the very first time I tried the Starbucks mobile order, I ordered the wrong drink, and I didn’t realize it until a few weeks later. It wasn’t my fault though, because at that time all of the drinks weren’t on the menu (they didn’t even have a caramel frapp– which is my go to drink when I don’t like the seasonal drinks). I decided to try the graham frapp for the first time, but I didn’t realize that there’s a ‘creme’ version of every drink. I believe the creme version adds a lot of milk and not as much of the coffee or flavoring. So when I get my drink, it’s a whitish color. I know right then it’s not going to be good. 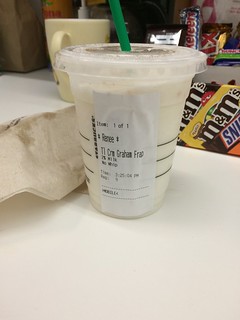 It literally tasted like milk with vanilla, sugar, and cinnamon. It wasn’t nasty, but as someone that doesn’t care for milk, it was too milky for me. When I spoke to my fellow Starbucks junkie coworker she said the same thing.
Starbucks mobile ordering:

The main thing with ordering from Starbucks, is that you have to have a giftcard to pay for it. You also need the Starbucks app. I’ve had the Starbucks gift card for a few years (I got one when they had a promotion- if you registered a giftcard, they gave you $5; they do that every so often) I actually have a gold card that has my name on it. 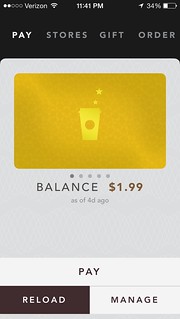 The actual card has my full name on it

You click on the upper right corner where it says order 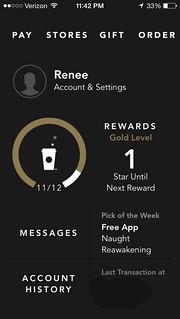 If you’re like me, and you have a bunch of drinks in the recents than you can click that & order it. Otherwise you can browse the menu. 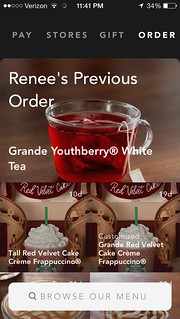 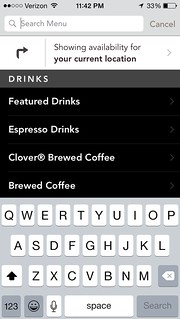 Find the drink you want (or food apparently). I clicked on frappucinos because that’s basically all I get (unless my throat hurts, then I get the tea) 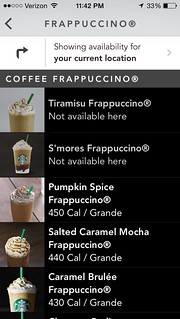 As you can see, tiramisu isn’t available. 😓 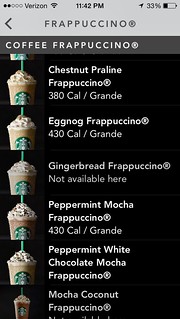 You can edit any drink you get. There’s a bunch of different options to choose from. 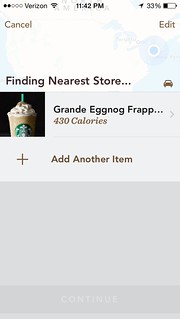 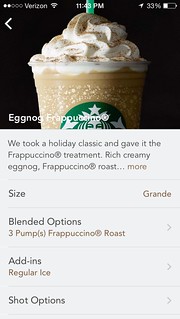 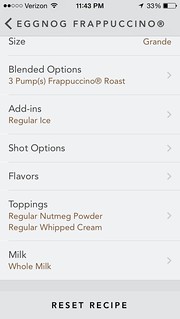 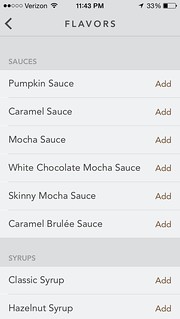 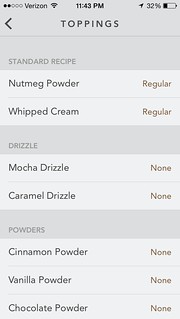 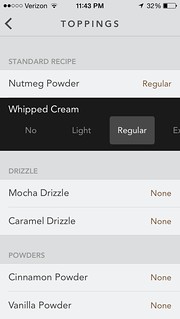 I’ve noticed with this a fully customized drink is more than one that isn’t (duh). For example, in the red velvet drink they have, they have java chips, which I don’t particularly care for. So I attempted to order that drink the way it is on the secret menu. (white mocha, w/ mocha & raspberry syrup) and I think it charged me $.25-$.50 more. So I changed the amount of java chips from 3 to 1 & prayed for the best. I did change the drink a little bedside the app just has mocha and raspberry syrup– which would taste like chocolate covered raspberries.

I chose to show the options with eggnog frap because that is going to be my drink until Jan. I ❤️ eggnog.

Once you get your order together it will show you your total. You pay with your giftcard and it will tell you how much time you have before it will be ready. My store usually gives a 4-9 minute time frame. I think when we place an order the sticker comes out, and they put it in the line with the rest of the drinks. So now I don’t have to wait 30 minutes to order a drink now. Woohoo! 🎉🎉 if I order something like tea, I’ll order it as I’m walking there. It will be ready when I get there, since it takes two seconds to make tea.

I’ve done mobile ordering with Starbucks at least 7 times and only once have I had an issue. The Starbucks that’s close to my job is ALWAYS packed- something I’ve mentioned before. So with this mobile order thing I save a lot of time. One day, I think my second time using mobile order, I kept thinking someone is probably going to take my drink. I don’t know why I had that thought. I waited 5 minutes after I ordered, like I always do. When I get to Starbucks, my drink isn’t there. 😒 I waited 5 minutes, just in case…. Finally I ask the barista if they made my drink. Someone took it while I was walk big there. The problem with mobile order, is that they put the drinks on the counter where people are waiting for their drinks. So if you felt like being a shady individual, you could just take someone’s drink if they’re not there. Which is what that person did. In order to get a drink, I had to show my receipt (aka my phone. Thankfully I brought it with me) and I had to wait for my drink to be made. 😒

Going based on the baristas reaction, that has happened a few times.

One of the flaws I see with mobile ordering, is that you can’t use a reward if you have one.