In my rush to return this bra, and the 30d, I forgot to take pictures of the bra so I could talk about it. Oops.

The Delphine bra from parfait, is a half padded bra. The lower half of the bra has a thing ‘foam’ like lining, and the top is a stretchy lace. This particular bra is the summer print, which features bright pinks and deep purples in a floral pattern. The lace on the bra is bright pink. The bows on the bras are blue.

When I first tried this bra on, I didn’t adjust the straps, so it gave me a really pointed look. It literally looked like this >. 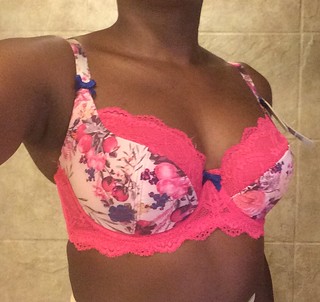 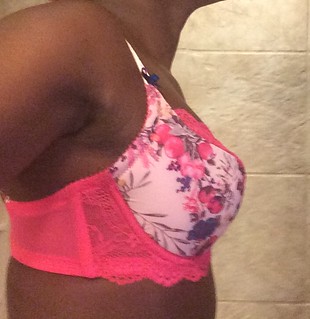 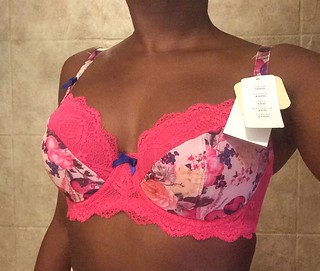 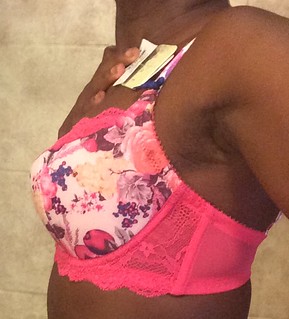 This bra fits, but it doesn’t. Seems to be the story of my {bra} life. The top of the lace cuts in slightly, but there’s a little room where the cup meets the lace. This bra is looking for someone with a little more center fullness than what I have, but less upper tissue. 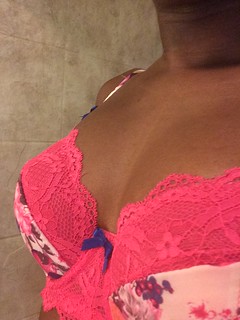 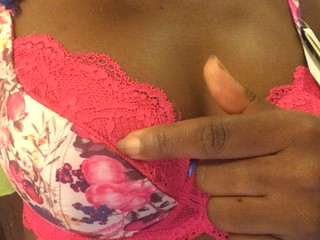 The sides of the cup are too high. If I wore this bra I would be irritated under my arms within five minutes. 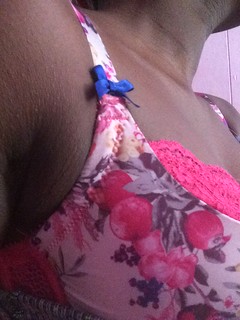 The gore is also too high. 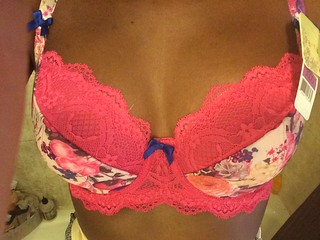 A not so good view from the side 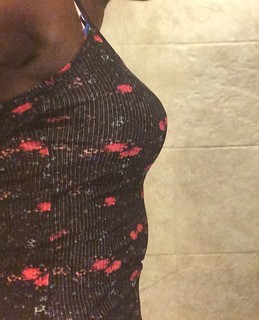 There’s a few differences between eBay and poshmark:
Shipping: eBay lets the seller choose their method of shipping and the amount they want to charge. So a seller could charge $15 to ship a pair of jeans for example. eBay does now seem to have some sort of limit enforced based on the items, but back in the day you could charge $30 for shipping and start the auction at $.99 (I’ve noticed the people that used to do that would also ship the slowest way so they could maximize profits… 😒). With poshmark, there is a flat rate price for shipping $4.99 of its under 5 lbs. so if you see a pair of earrings you want, you should look through the sellers other items to bundle, and ‘save’ on shipping. Poshmark the company pays for shipping. Once something sells they send the seller a shipping label to print. So all you have to do is print the label and attach it to your package.
Payment: with eBay buyers can pay using paypal and I believe there’s still the option for paying with money order/check. With poshmark you can pay with your CC. With eBay, as a seller as soon as the buyer pays, you get the money. Payment through poshmark stays in limbo until one of two things happens: the buyer marks the item as received. OR if by chance the buyer doesn’t mark it as received within 3 days, the money gets released 4 days after it has been marked as delivered. This has led me to deciding not to sell high priced items there. I can’t take the chance of selling a $200 bag and possibly not getting the money for a week.
Fees: eBay (for me) has free listings every so often, otherwise it’s $.30/listing ($3.00 for a reserve) plus selling fees (10%). Poshmark only has one fee, and that’s 20% of what your item sells for. When you lost an item, poshmark tells you how much you’re going to get. If someone makes an offer and you accept, they’ll tell you what you’ll make. 20% seems like a lot, and it kind of is, but you can adjust your prices accordingly. But it also may end up being cheaper in the long run.  Because if you keep listing something on eBay, for $.30, it will eventually add up if it doesn’t sell quickly.
Poshmark has an option for you to ‘follow’ people. And when it comes to listings you can share, like and bundle, as well as make an offer.
Poshmark also has ‘parties’. For example there will be a ‘Coach & Converse party’ where people can share listings of Coach items and Converse items only.

I’ve been a part of a few ‘share groups’. Where a much of women sign up to share whatever it is in the guidelines for that particular group. One of the groups I joined, it’s share 20 listings in the under $25 category. About 38 people signed up, so that’s 760 shares that everyone gets. Most peoe have over a thousand followers, so when they share a listing, their followers can see them. That’s not to say their followers haven’t seen those listings before, because they might have. When in on poshmark, I’m looking for certain things– like houndstooth (anything). So anything that has the word ‘houndstooth’ in the slotting or description, I’ve most likely seen. However, some people don’t use the term houndstooth in the title or the listing, so I haven’t seen every houndstooth listing.

I’m not really trying to buy anything, so I don’t really look at my ‘feed’. My main goal with poshmark is to sell– get rid of stuff I don’t wear that are taking up space. I worked at two denim clothing stores, so I have amassed a crazy amount of jeans– that I don’t wear.

So, it almost seems like the sharing groups are pointless, but their not. A few meme bets have mentioned that they’ve sold items under $25, that coincide with the days they were a part of the groups. There’s another sharing group where you only share 8 items from the bottom half of participants ‘closets’. Some people have thousands of items listed so a lot of items don’t get seen often.

I participate in the groups when I’m off, because I don’t have the time to devote when I’m working.

If you’re interested in joining poshmark, my name is i_love_big_men. There is a referral code, soupy get $5 towards your first purchase, and I get $5 when you make that purchase (so it’s a free $5 for both of us). My referral code is PNIBH, you enter it when you are setting up your account at the bottom.

my main goal for this blog was to post about my stories with bras, and how they fit. I haven’t been postin lately, due to three things:

1. My job. I’ve been getting more hours lately (woo hoo! 🎉🎉). So instead of working three days a week, I’ve been working five. Which is always a good thing because I have bills. But when I come home, I’m not always in the mood to make a blog post, because it actually takes a lot of time.

2. Speaking of time, I use my iPad for a majority of my posts (except this one-I’m on my phone right now). Right now I’m in my phone because I was in the middle of writing about the Delphine bra in 30dd and my iPad is going ridiculously slow. I went to save my draft, and 5 minutes later it’s still ‘saving’. 😡

I seem to be having a lot of issues with my iPad and WordPress. I’m not sure why. It’s little things but it’s annoying because it slows everything down. Like right now, I’m ready to add pictures (one by one) and I’m still waiting for the page to load. I think with some of the issues, it’s my iPad. Like if I got to a website where there’s a lot of pictures, Safari shits down. I can’t even play music videos on YouTube at the moment. Anyway, some of the issues I think are WordPress related. Like if I notice in the middle of a sentence/word a misspelling when I try to ‘click’ on it and fix it, it’ll go somewhere else. This happens every single time. And it’s annoying.

3. Poshmark. I’ve spent an insane amount of time on poshmark. Window shopping mostly. I will try to talk about poshmark briefly.

Poshmark is an app where women can but and sell used or new clothing, shoes and accessories. It’s in app form only, there’s no website (like how eBay has a mobile version, an app, and a desktop version). You can find name brand items as well as unbranded items.

My Melissa  dessous bras came, yesterday. I had to wait to pick them up because I just missed the mailman yesterday. I was so anxious waiting to get to the post office today.

The bras came in a box. 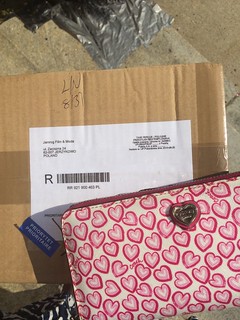 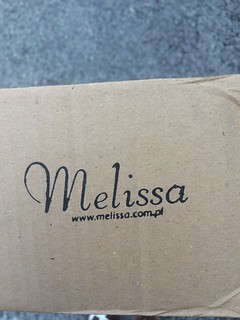 Wrapped in some wort of pink wrapping fabric (it’s not tissue paper, it’s a lot thicker) 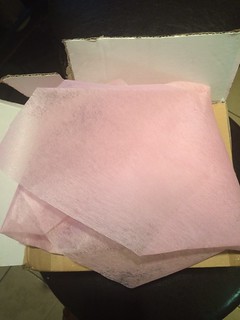 The bras are very beautiful & soft 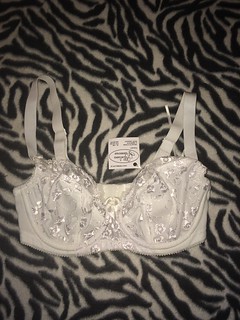 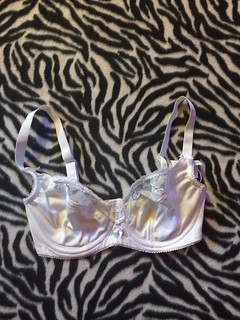 Both bras are 60E, and while neither really fit, one of them I couldn’t close without using my extender!!! 😳

Tue two bras I bought were in the sale section. You cannot put sale items in a shopping cart, you, have to email them telling them what you want. In my email I asked them if they shipped to the US, and if so how much was it. I believe I wrote them in English and below it had a Polish translation. Their response came back in English. The shipping cost ended up being around $15, so I paid $45 for 2 bras. The shipping took about 1 week, from the time it was shipped to the time it arrived.