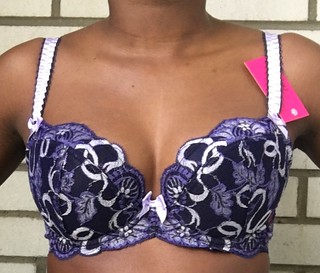 I returned the 65E fairytale bra, and asked Jaimie for 1 cup size smaller- 65DD.  However, I didn’t respond to Jaimie when she asked me if I wanted her to add the fairytale 65DD to her current order (august), so it ended up being placed in her next order, and luckily I was able to get the last bra made out of this fabric. I say luckily, because I kept the panties, but returned the ill-fitting bra.

Jaimie let me know this bra was included in her Oct order, and it was shipped to me Nov 9th (2 days after my birthday). I don’t remember exactly how long it took, but in November all of my international packages took longer than normal to be delivered, I think I got it a little under 2 weeks.

I love it. The bra is all around comfortable. 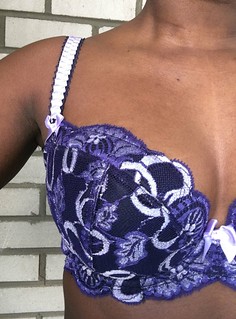 There is no space in the cups. In the pics the cups appear slightly pointy, but the material has relaxed with wear (yes, I’ve worn this a few times, but not back to back). The height of the cup is nice and low, at 5.25 inches (a hair lower than the 65E). The depth of the cup is 8.25, which is a lot better than the 9 inch depth that the 65E had. Oddly enough the width of the cup in 65DD is bigger than that of 65E, 5.25 inches and 5 inches respectively. 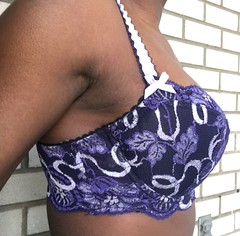 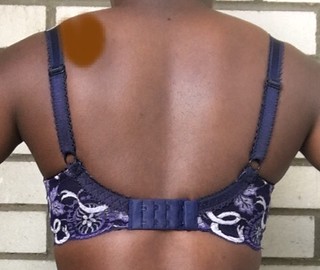 The band is nice and firm. It stretches to 27.5 inches, which is 1 inch smaller than my comfortable underbust measurement, but it doesn’t feel too tight. 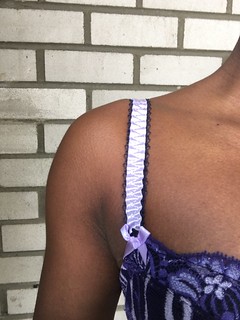 I didn’t have to adjust the straps with this bra as much as I did with the 65E. The straps are about halfway adjusted in these pics, but I think I loosened them up a little more after wearing. (The ribbon on the front of the straps may appear whitish, but it’s actually a very light purple, and matches the ribbon on the cups) 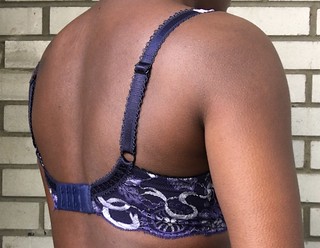 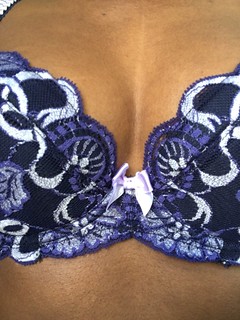 The gore is low (but higher that the 65E), at 1.75 inches. The cup separation is .75 inches, but I think I need something narrower. It’s not sitting on tissue, but I think a narrower gore would suit me better. 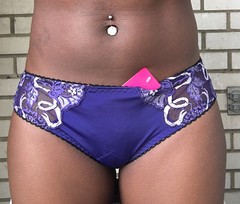 The panties are size 36

One of the things I didn’t like about this set at first was the the fabric on the panties doesn’t match (color wise) with the bra. They’re more of a bluish purple. However, I do wish I also bought the thong.

I love Ewa’s panties/thongs, as they’re very comfortable. The material is very soft. They do ride up a bit when walking around with no pants on (the pic shows how they look when I walked from my room to my balcony), but this isn’t something I’ve noticed when wearing pants. They do have a considerable amount of coverage, but they’re not “grannyish”. The gusset is diamond shaped, and the seam is visible from the front. 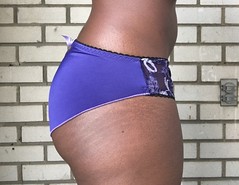 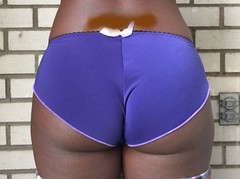 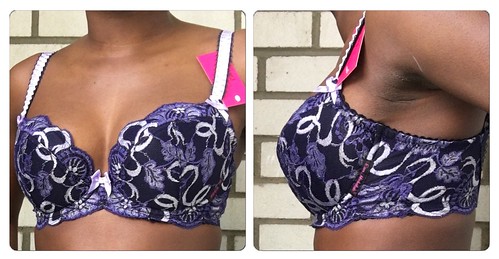