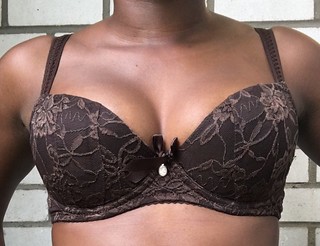 The Comexim Annika bra is an exclusive to Zathiya, that is, you can only buy it from them. When I first saw this bra, I knew I had to have it. It’s a brown bra, it will most certainly function as a nude for me, even though st somewhat darker than my skin.

The Annika bra was sold as both a plunge and a 3HC (3 piece half cup). It also come with a copper colored ribbon along the top of the cup as well as a copper bow at the gore. Truth be told, I didn’t care for the copper color, that would take away from the ‘nudeness’ of it. So when I decided to order it from Zathiya, I asked for there to be no bow, or ribbon at the top, as well as a 1cm reduction of the cup and gore *if it could be done*. Aisha responded that I could have the bra without the upper ribbon, but I had to have a bow. She said they were able to put a brown bow, instead of copper. At the time I wasn’t happy that I had to have a bow at the gore, but I’ve since received a few bras without the bow, and the bow does add “a little something” to it (and I will not be requesting any bras without the bow at the gore anymore)

When I confirmed with Aisha that I wanted the bra, I had to put down a 25% deposit, which came to about $12.75, this was excluding shipping. When the bra was received my Aisha, she sent me an invoice for the rest and the shipping (~$4). When the invoice was paid, the bra was shipped to me. The transaction went through without a hitch. Ordinarily I don’t order from Zathiya (or braobsessed), unless they have something exclusive that I want, simply because both companies rarely have anything in my size in stock. Both companies seem more aimed towards bigger cup sizes. 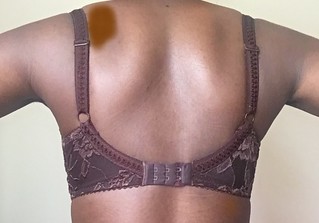 The band looks like it’s riding up in the profile pics, because it is. For the longest time I wore the bra with the straps adjusted to a certain level, but the last time I wore it, they felt too tight, so I loosened them. The band does stretch to almost 30 inches, essentially making it too big because my snug underbust is 28.5 inches. I don’t feel the band move when I wear this bra. 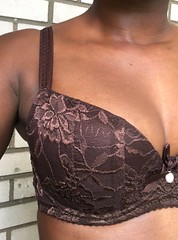 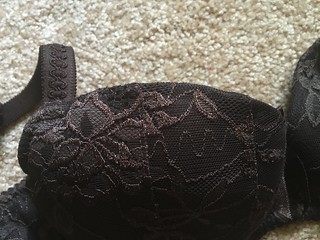 I’ve worn this bra a lot. I am now noticing that the tops of the cups are curved a little bit, but that is most likely due to the fact that there’s no ribbon at the top. It does bother me, because it is noticeable through shirts. 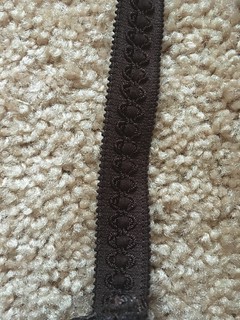 The straps were really hard to adjust. I had to use a safety pin to be able to adjust it. I don’t believe the straps have been moved in, since it wasn’t an alteration I asked for, but they don’t seem to be too wide set. 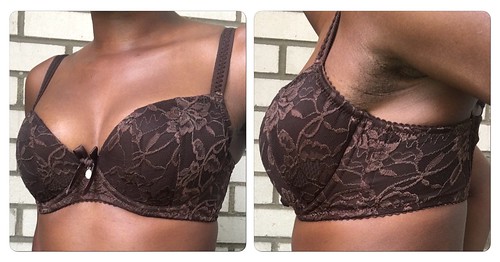