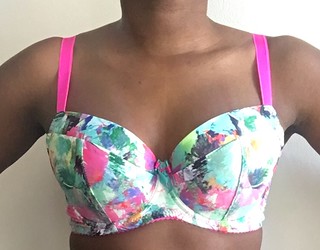 I ordered this bra on Black Friday weekend because Comexim was having a 15% off sale- which doesn’t seem like a lot, but it made the price go from around 160pln down to 135pln. 135 is around what Comexim bras used to cost when I first started buying them.

I requested that the bra have the following alterations: cups reduced 2cm, total gore height 5cm, straps moved in 1cm, and thinner straps. I meant to requested a cup reduction of 3cm, not 2cm. My goal for this bra, was for it to be very low in the cups, like Ewa’s M style. I love Ewa’s M style bra, but wish there were more color options. I figured depending on how this bra came out, I would order a bunch more with the same alterations, I especially wanted to order the magic bra with the very reduced cups in mind.

My order was shipped out about a month later, right before Christmas.  I knew from recent orders that I wouldn’t get the stuff for about another month or so, due to the holidays. I ended up getting the package around January 13th. When I opened the box, I noticed the 2 bras were in there, but the panties were not (I’d also ordered the Bellissima). I’d thought maybe I’d dropped it, so I looked all around the couch I was sitting on. Nope it wasn’t there. I looked at the declaration on the box, and it said 2 bras, 1 thong. Okay. I looked at the receipt that was inside the box, it only had the 2 bras. Something wasn’t right. 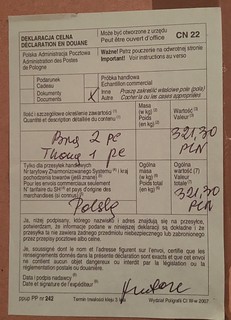 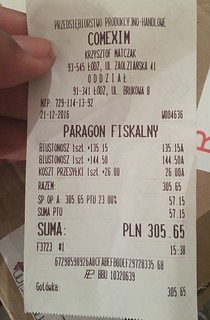 I also let them know I wasn’t happy with the bra because I asked for customizations,  and I don’t believe they were done.  When Joanna responded, she let me know that Imcould return the bra, and wanted to know which alterations did I request that weren’t done. I repsponded January 16th (most of this conversation took place the 16th). AND I HAVE NOT HEARD BACK FROM THEM SINCE.  It was nice of them to say they’ll take back the bra that was supposed to have alterations, but if you can’t respond to my emails, I’m not going to send something back so you can refund me.

So… needless to say, I am not happy with Comexim right now. 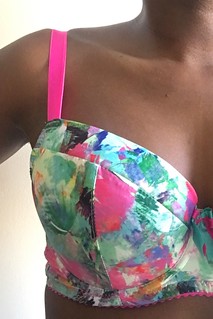 As you saw, I requested a 2cm cup reduction. I don’t think this was done, but some sort of reduction was done because the cup height is 5.5 inches, an unaltered 65G is about 6 inches. The bottom of the cups is shallow. 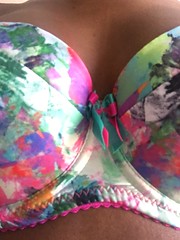 I requested that the gore be a total of 5cm, which would make it 1.96 inches. I said I wanted this to mimic an M bra, but the gore on those is around 1.5 to 1.75 inches. I didn’t think Comexim would alter a gore that low, so I settled for 2 inches. But that wasn’t done. The gore height is 2.75 inches, which I believe is the unaltered Comexim gore height. 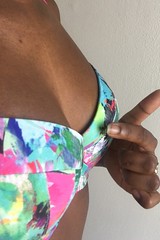 So the cup is slightly reduced, but the gore is not reduced. I believe that is why this is happening. There is a space at the inner portion of the cup by the gore. My breasts don’t go that far outward to fill that area (btw none of my other Comexim bras have this gap) 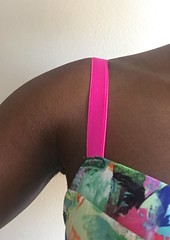 I requested that the straps be moved in. I’m not sure if this was done. When I have the bra on, it does feel like the straps are a little more inward, but when I look at the pictures, the straps look very close to my armpits. I haven’t worn the bra, so I don’t know if this is something that would irritate my skin or not. I requested thinner straps…. and you can see that was not done.  The straps are very stretchy. They also feel like they’re too long, I’ve adjusted the straps halfway, and they still feel like I can adjust them more, but I think if I adjust them anymore, the band will start to ride up. 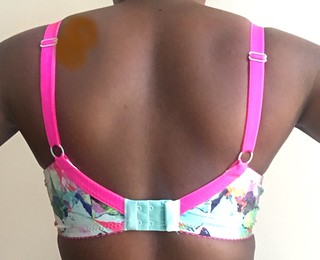 The band is firm at 28 inches. The wings are 4 inches in height, and it very much gives a flattened appearance (no bulges). 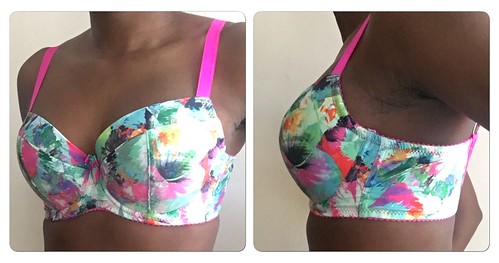 Overall, I’m not happy with my experience with Comexim. This may be my last time ordering from them. It is a big problem to me that I wasn’t made away of the panties, nor refunded until I said something. That’s not good customer service. I don’t like how whenever someone asks for alterations, we’re not actually sure if they were done or not. I don’t like how if you add something to your order Comexim doesn’t add it to your actual order. (Anytime I’ve added things on to my order from Ewa, they’ve ALWAYS added the items to my order summary on their website, so I can see it.)

I’ve been told by a few other people that Comexim forgot to add things to their orders (from Black Friday), so it wasn’t just me, unfortunately.

I ordered my first Comexim bras in April 2916, and literally every month until December I’ve placed an order. They lost a loyal customer due to their lack of customer service.