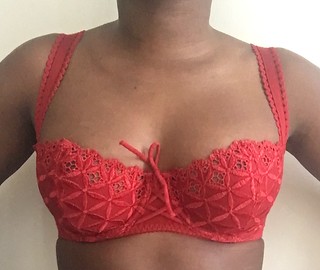 Aubade is a French company, so the 85 band size, correlates to a size 32. I don’t know much about Aubade other than that.

The band was professionally altered. It was originally a 32/85 (I assume). I have the size in the title as being 85C/D, because since there is no tag on the bra, I’m not 100% sure of the original size. When I bought this bra, it was sold to me as being 30DD, but after looking at the measurements, there’s no way this bra was 30DD (or sister size 32D), unless the cups ran small. 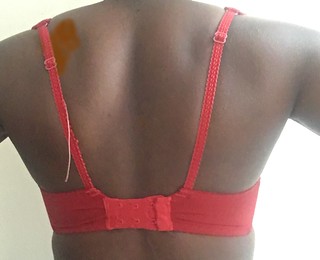 The band was {presumably} altered from a 32, to 30, but it only stretches to 27.5 inches, before the wires start to distort. The wing of the band has 2 layers of fabric a somewhat stretchy inner mesh piece, and a cotton feeling outer piece. The actual band is a totally different stretchy nylon/polyester feeling and it’s only 1 layer. The way this bra was altered was by cutting away some of the back of the band. I don’t think the seamstress did anything to the straps. 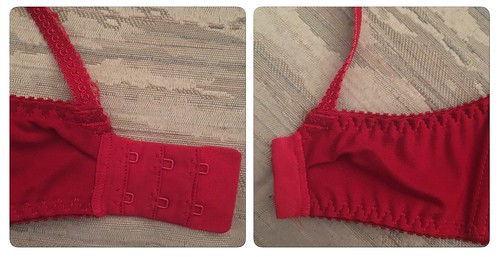 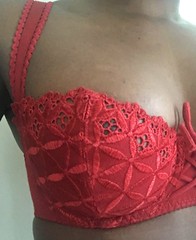 The cups are a halfcup style (this bra apparently comes in 3 other styles– triangle, padded, and 3/4). Most unlined halfcups don’t work for me, and this is no exception. However, this bra is currently too small for me. Like I said previously, I don’t think this bra is the size I was sold. The width of the cup is 4.6 inches, and the depth is 7.75 inches.  I’d need about half an inch wider, and around half an inch deeper as well. The cup height is 5.25 inches, which seems appropriate for a half cup. 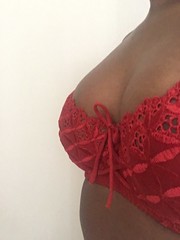 This bra wouldn’t be good for FOT breasts because there is a thin band of elastic at the top of the cup. The fabric on the cups is very stretchy. There is a mesh side sling. 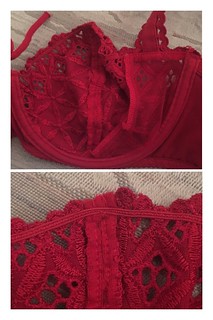 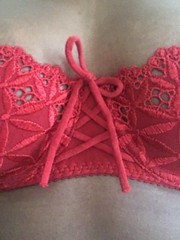 The gore on this bra is ridiculous; it’s beautiful, but ridiculous. The gore is 1.25 inches wide, and 2.5 inches high- this is the widest I think I’ve ever seen for a bra that is more than half an inch high. The gore is best for wide set breasts, because of the lacing design on the gore, you wouldn’t want to alter the gore. Naturally the very wide and high gore is sitting on breast tissue, and I can imagine after a while it would be painful. 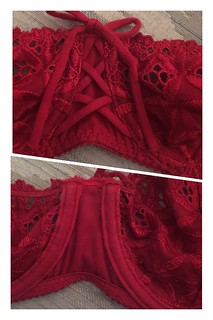 Look at how wide the gore is 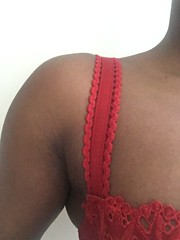 The straps are very wide set. My shoulders aren’t narrow and you can see the straps are in my armpits. What makes the straps somewhat bearable is the altered band. It somewhat makes them not as wide, but they’re naturally wide. The only way to make the straps more narrow is to actually alter the bra. The actual straps are also wide. They’re wide in the front, but thin in the back. The back part of the straps are .375 inch, but the front part is 1 inch.

I’d be interested in trying this in a bigger size if the gore wasn’t so wide. 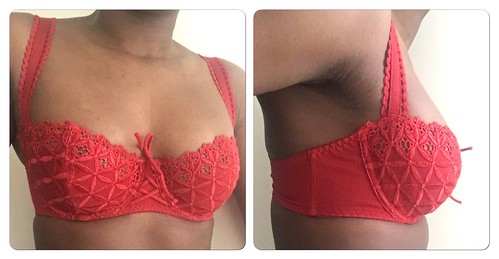