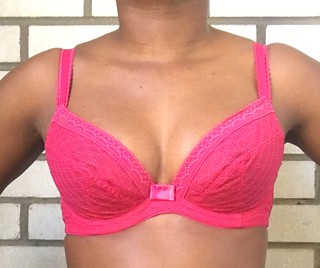 I have very few of the new Panache/Cleo bras. Actually now that I think of it, I’ve owned few Panache bras other than Jasmine. The first Panache bras I had were the Loretta (plunge & balconette). I decided to try this bra for a few reasons. The main one being that I saw it actually had a low gore. Another reason was the color- I loved the ‘boldness’ of it. The third reason was because I found it for $20 on zulily, which I thought was cheap. Since I’m more or less refusing to buy from zulily, I looked around and found it cheaper on eBay.

I bought it from “Lingerie outlet store” on eBay. They have a lot of Cleo/Panache/Freya/Curvy Kate etc. for cheap. I’d bought from them in the past without issue, so I didn’t hesitate to buy this. Thankfully I had some sense when I ordered this bra, because I was going to order both colors for myself, and one for my sister. According to Lingerie outlet store’s eBay page, they ship within 24-48 hours. I ordered the bra Oct 18, by Oct 24th it still hadn’t shipped out, so I contacted them. They responded quickly by saying they had some technical issues on their end, but that my order was going to be shipped that day (10/24). By Halloween, I saw the order still hadn’t shipped, so I asked them about it again. So they said again they would ship it that day, and this time they actually did. While I wasn’t in a rush to get it, I wasn’t happy that it took them 2 weeks, and 2 messages for them to ship the bra. When I posted about this on twitter I was made aware by one of my followers that they had shipping issue with LOS as well.

On to the review:

When I searched for reviews of this bra, I came across very few, and all of them were women a lot more busty than I. So I can’t say I found the reviews helpful.

This bra was an utter fail on me. To be blunt, it fit me very much like a Freya ‘plunge balcony’ (the only successful Freya plunge balcony I’ve had was Freya ignite). 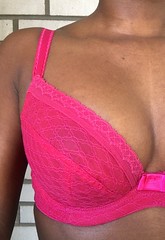 The material on the bra was very firm, not one ounce of stretch. It was Freya like in that there was visible cutting in at the top of the cup, but right at the seam, there was some space. It was also very shallow at the bottom. So with those 4 things, I was left with a very pointy appearance. The top of the cup pushed my breasts down, and gave an unfavorable appearance. I can’t say who this cup would work for, but it’s definitely not for FOT, maybe even or shallow? If I sized up, I wouldn’t have had the quadding, and I possibly would have had enough room at the bottom, but there would have been too much space where the seams meet. 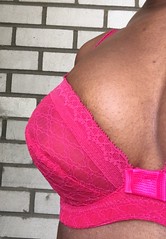 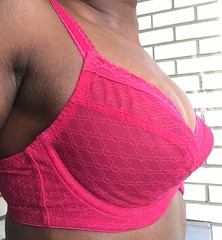 This looks so bad. 😣 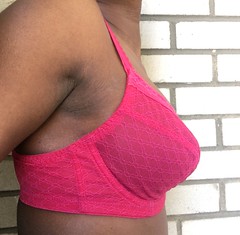 The gore was very low, however I forgot to measure this bra before shipping out, so I can’t say how short it was. But it was definitely lower than 2 inches. 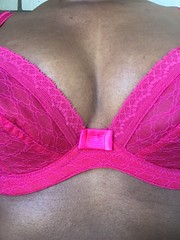 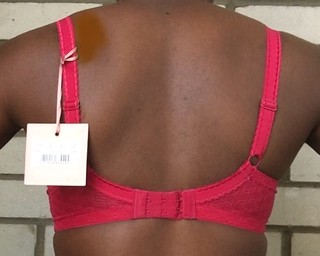