I bought this bra because 1 someone was selling this along with some other bras I was interested in, and 2 because I was waiting on my 3DM order from Ewa, and thus bra was the same size as those. I’ve always loved the way the bra looked, but since it’s a lighter color, I think it would look best on lighter skin. (If you look at the pictures on bratabase the bras has a pink hue to it on the fair skinned women, but it looks beige/tan on me). This bra won’t work for me as a nude bra, because of the color and the design, but I haven’t been wearing white tops lately anyway. 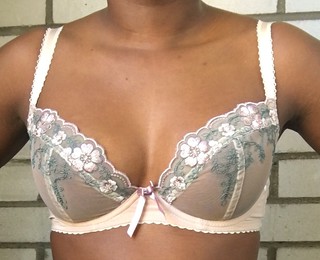 The 3DM bra is Ewa’s unlined bra for smaller breasted women. From what I can see with this bra, it is a cut that I like very much. And I am definitely anticipating my Amorek and Różowa Mgiełka (I wish I didn’t miss the Walentynka) 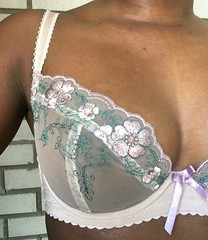 The cups are nice and low. Both the upper and lower portions of the cup are made up of a single piece of sheer mesh fabric. As you can see from the pics, my nipple doesn’t line up with the apex of the cup. My nipples are a little lower and more centered. If my nipples lined up with the apex, I wouldn’t get as pointy an appearance as I do. My nipples aren’t prominent, but I notice they often make my breasts look pointy in unlined bras.

I like the shape I get in this bra, my breasts appear lifted, and somewhat rounded (more rounded than normal) 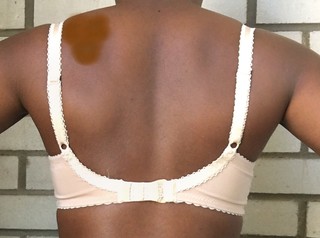 One of the things I don’t like about this bra (possibly the only thing) is that the fabric on the band has wrinkles. It makes the band look like it is loose. The band is a little big for me as it stretches to 28.5 inches before the wires start to distort, but it can stretch to 30 inches.

I did wear this bra 2 days in a row. And I noticed on my bigger side there was a small area where my skin was getting irritated from the wire (on the side of my breast). It didn’t help wearing the bra back to back. It wasn’t a huge pain, but it is something I occasionally felt. The wires feel like they’re possibly not as heavy as the wires on my BM, or CHP, so that’s always a good thing. 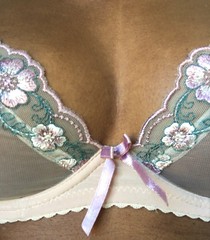 The gore does not bother me. 1.75 inches high. The top of the wire channels are overlapping, but the actual wires are not. 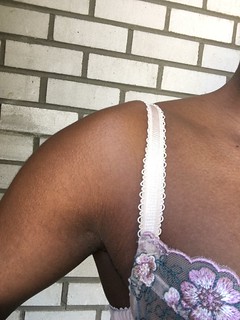 Excuse the darkening of my skin, as soon as I went to take this pic it got very windy, and I got goosebumps.

The straps are plain and unremarkable. They would probably be considered too wideset for someone with narrow shoulders, but they fit perfectly for me. 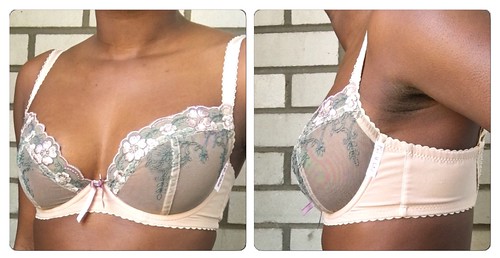 I really like the fit/style of the 3DM, and I patiently await for more bras in this style from Ewa.