I am going to be doing an updated review on these panties. I’ve worn them twice since my first review of them.

When I got my period in March, it was breakthrough bleeding that lead to a period. It started March 7th, and ended March 31/April 1. From the 7th – the 28th it was spotting. The kind of thing I could get by, if I used a tissue or panty liner. The 28th, I remembered that I had these panties, for some reason I forgot. Anyway, I found them, and decided to wear them the next day. If I remember correctly, I probably started the sugar pills a few days before, so I was expecting my period the 29th (I always get it on wednesdays). My periods on birth control are generally light, so I didn’t think twice when I put the panties on and left for work. When I say light, I mean a light tampon may or may not be filled, 6 hours later when I pull it out. After the first time I used to the bathroom, I noticed that the gusset felt damp. I was able to get past it, but the next time I went to the bathroom, I still felt it, and it bothered me, I literally had this expression on my face:

Dampness in my panties is something that drives me crazy. So I got a tissue and tried to remove as much blood as I could (blood that for whatever reason didn’t get absorbed), tried to put the panties back on, and I still felt the dampness. So I did what I didn’t want to do- I put a piece of tissue on top,of the gusset. (See facial expression above). I didn’t feel any dampness any longer, however, it was a thin layer for my blood to go through. And Everytime I went to the bathroom at work after that, I had to use toilet paper. Granted I didn’t go to the bathroom that much. I did not feel secure with these panties on. I mainly sit at work, and Everytime I got up, I had to check my seat to see if there was any blood. (There wasn’t any) But, by the time I got home, I noticed that there was some blood on the outer part of the panties. The blood has seeped through all of the layers. I didn’t think to bring a backup pair of panties because I knew I wouldn’t have filled 2 tampons.

I am posting links to the pics of the bloody panties, in case someone reading this doesn’t want to see the pics.

The outer part, it’s hard to see the wetness, but it’s in the middle

So I decided to wear these panties again. Main reason being, I only had ‘regular’ tampons, and no panty liners. (I just came back from vacation, and didn’t go to the store, and on my day off, I forgot to get tampons– I forgot to get some today as well…) Anyway, so I wore these to work, not expecting anything. Certainly not thinking I’d need to update y’all about the panties. So I definitely didn’t bring extra panties, or panty liners (which I still didn’t have). I put the panties on around 7am. By 10:30am, I’m at work like:

I felt that wetness, that I’m sure everyone who has had a period before, has felt. It was wetness on the outer part of the gusset. I went to the bathroom, and there was blood on the top, some had soaked through, AND there was blood on my pants. I know this sounds crazy, but this day, wearing the thinx panties basically felt like I’d worn nothing but tissue between my legs, with regular panties. Luckily for me:

-I work at a place that at one point required black pants, they’ve allowed us to wear different colors, but I still wear black. (So no leaks were visible to anyone)

-We have a washing machine & dryer. I didn’t wash my panties there, although I could have. I did have a clean pair of pants fresh out the dryer to wear (but I do have a spare pair in my locker)

-There is a store a hop, skip & jump away

-I had a patient not show up.

So I was able to go to the store and buy some panties, and panty liners, and change with no issue. 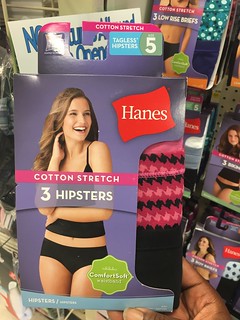 More pics; these were taken when I was able to change, not when I first went to the bathroom.

Based on these last 2 experiences, I most likely won’t wear my thinx panties anymore. I don’t fee so secure, and I don’t think I should have to change in the middle of the day, especially since I had light periods. I shouldn’t have had bloody pants 3 hours after putting the panties on.

Earlier in the morning I was thinking to myself that I needed to buy more, but if I only wore the panties 3 times, and they’re already leaky, I’m not taking that chance. Especially since they weren’t cheap. It would have really sucked if I had on white pants.