This is the 3rd bra I’ve had in the opium wash. Sadly, this one didn’t work out for me like the CHP, and PL. 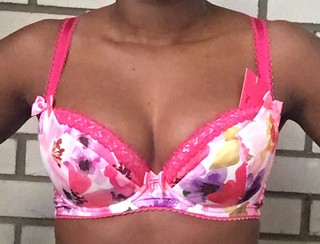 Originally I was going to order this from Aisha at Zathiya, in exchange for the opium PL that didn’t work. However Aisha didn’t get a response from Ewa about this bra, until 2 weeks later. When Aisha emailed me to let me know that Ewa still hadn’t responded to that particular email, she suggested that I email Ewa. The email was to inquire as to whether the opium bra could be made in M cut. Ewa responded to my email literally in 5 minutes. However, at that time I had an order that I just placed, so Ewa said she would add it to that order. So instead of doing an exchange to Zathiya, I ended up doing  return.

This is going to be a quick review, since this bra doesn’t fit. In a nutshell it is overall too small.

With the other opium bras, I bought a 65 band, but since this was a different cut, and I know 70D works in the M, that’s the size I went with. Unfortunately, the band only stretched to 25.5 inches. Stretching the band beyond that caused the wires  to distort. I personally would consider this band as running 2 sizes small– it’s a 70 band. but only stretches as much as a 60 band would. I don’t know if I’ve ever mentioned this, but I consider my breasts to be low set. This was realized early on in my abtf journey, when I tried on a 30D Cleo bra, and the straps were adjusted at their longest, and were still too tight. 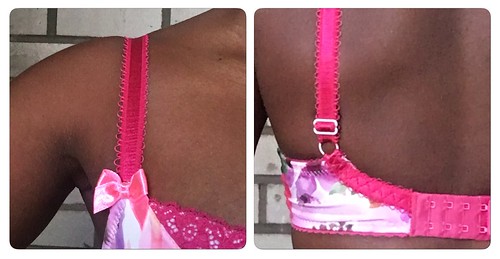 Surprisingly, with the straps adjusted all the way, and were still too short for me. I adjusted the straps as long as they could go, and they still felt really tight. 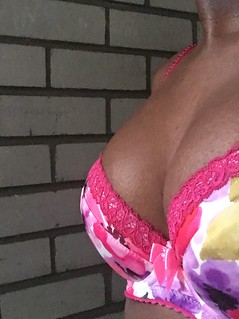 The boob closest to the camera is my smaller side.

The cups were also too small. Without the pads, I was almost/somewhat quadding. Even on my smaller breast. The height of the cup was only 4.75 inches. Every M bra I’ve owned has been 5 inches in cup height (the Roma & the 65DD Chaerek measure 5.1 inches). So this was 1/4 an inch too low. When 5 inches is ‘low’ that 1/4 inch makes a big difference. 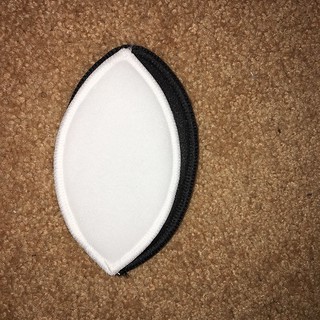 For whatever reason, the pads from this bra are smaller than the normal M pads (which are the size I’ve gotten with most Ewa bras). I can’t say whether the smaller size makes a difference with the look or feel, because I don’t wear the pads.

If it was just the band that was too short, I would have decided to keep it, but it is just too small for me. 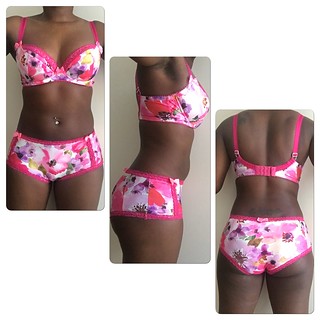 I emailed Ewa about the band being too small, and she told me to return it for a replacement. She also let me know that I could get a refund for the return shipping via PayPal. I already knew this, but I thought it was nice of her to tell me. I sent the bra back (via first class for $21) Dec 16th, it was delivered Dec 19th. I emailed Ewa to see if they have received it. I wasn’t expecting it to have been processed at that point, but I wanted to let them know that it was delivered. I didn’t want it to get misplaced, with the holidays around the corner and all. Also, when I returned the bra I didn’t include any of the paperwork because my niece ripped it up. (Literally the only time I needed to return something the receipt got messed up. Meanwhile I still have the receipt from my first Ewa purchase) I also initially emailed Ewa about the bra not fitting with a different email address than I normally use (but I assume I’m the only person the ordered an M Opium). Anyway, Ewa emailed me back to let me know they received it and the replacement had been sent out, and they were giving me a store credit for my troubles.

I got the bra a little over 2 weeks later. I wore the bra twice, and for the most part, I didn’t have any complaints about the fit. 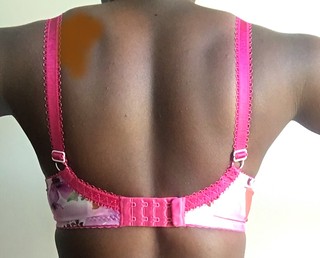 The first time I wore it, when I went to take it off to try some bras on, I noticed that on the left side the ring (connecting the back of the strap to the band) had pressed against my skin, and did hurt (once I took the bra off- before I took it off there wasn’t any pain).

The second time I wore it towards the end of the night, the bottom of the band felt too tight, on the right side. On the ‘new’ bra, the band stretches to 27 inches (unstretched its 22.25 inches). The original bra was 22 inches unstretched, and stretched to 25.5 inches (on a 70 band!). As much as I love the M cut, I keep buying 70 bands because they don’t really stretch beyond 28 inches.

When I initially put the bra on, I can feel the straps (like it’s too wideset), but I can’t feel it afterwards.  The straps are the same, I have them adjusted all the way. I think because they are thick, like the regular opium straps I have to adjust them all the way. (I have the straps on the M czekolada adjusted all the way also, and those straps are thick like the BM Naomi). I do wish that they’d completely,remade the bra, but that was probably asking too much. Plus Ewa didn’t know that the straps were too short, I didn’t mention it in the original email. I’m thinking what they did was literally just take off the band, and replace it with another band. 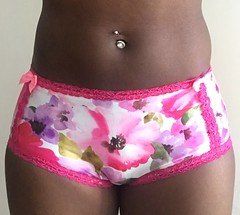 I actually wore the shorts, with the bra. The shorts are cute, but I wish I’d ask for briefs or a thong. The only issue I had with the shorts, were that the bows on the front were being pressed under my scrub pants. The shorts didn’t seem to leave panty lines under my jeans. 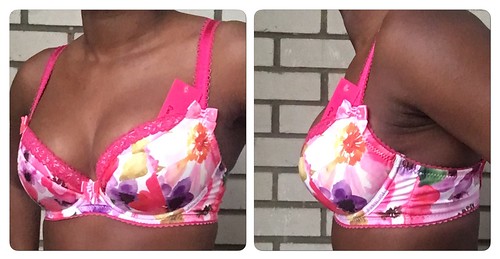 I love the Opium color. I wish the band was made, like an inch longer,  but the band currently works. I don’t think I need an extender, since the band didn’t bother me until over 12 hours after putting it on. The straps could be longer, but I’m not got to alter them. I may ask Ewa if I can get a different bottom made in the future (now that I’m into matching bra and panties, I can see why some women buy 2 pairs of bottoms.)