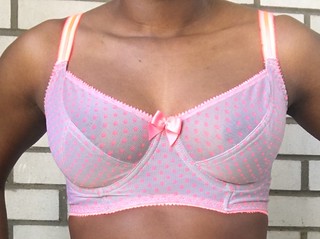 I’ve wanted this bra, in this color, ever since I got the other Dessous longline. When I bought the other longline, I could not find this color at all. So I gave up looking. Around Black Friday I came across this branon brastop. It was on sale for like £13, but I didn’t buy it because I was hoping it would be cheaper on Cyber Monday. Well, I was wrong, on cyber Monday the price went to £17, and stayed that price until March (😭). I would check brastop often to see if the price went back down, also to see if this size sold out because it was the only 30E left. I really wanted 28F, but it wasn’t available. I ended up buying this when it went to £16, but I only bought it because I tweeted to brastop that I wanted to add something to my order, but I couldn’t find that bra (I didn’t look hard enough because I ended up finding it 2 days later). I didn’t want them to hold my order for nothing, so I asked for this and the matching panties.

I’m happy that I was able to finally get this set. 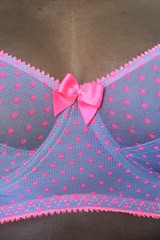 The gore was too wide for me. The gore measures a hair under 1 inch wide- 7/8s of an inch. 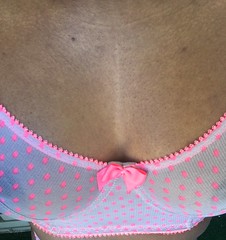 However, because it’s so high, it was sitting on breast tissue. I was able to push the wires down the channels at the gore, so there wasn’t any stabbing; pushing down the wires I was able to get 1/2 an inch of free space. The gore just got wider the further it went down, so the inner portion of the wires were sitting on breast tissue. It wasn’t painful, but just annoying because I was aware that the wires and the gore were raised. 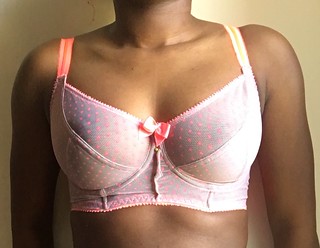 I decided to alter the gore, otherwise the bras wasn’t really wearable. As I’ve said before, when I alter things these days, I don’t have a desire to be 100% accurate (nothing is getting cut), so I just pinned the fabric at the gore in place, and hand sewed to make the gore less wide. If you decide to too this to this particular bra, be forewarned that the material is mesh and this alteration will mess up the material if you make it too tight, or if your breasts are heavy and close set. I decided when I altered this, that I was going to sew and leave the extra fabric on the outside, instead of sewing it on the inner part of the bra. I like the way it looks, and tbh no one else is going to be looking at my bras. 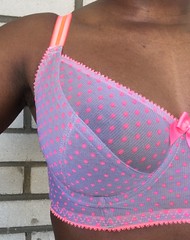 One of the things I absolutely love about this bra, and the other Dessous longline that I have is that there is depth to this bra that the regular Dessous bras don’t seem to have. Initially I thought the depth was above the wire, but it’s really just in the lower portion of the cup. There is wrinkling in the fabric, but I think that’s because how wide {the entire length of} the gore is. My nipples are in the upper portion of the bra, so I’m getting a bit of in cup quadding. I do a reverse swoop and scoop after putting the bra on. Before I altered the gore, the reverse swoop and scoop didn’t do anything at all. It couldn’t because there was no where for it to stay. The wires on the inner portion of the cup wasn’t touching my skin. Taking in the gore did seem to open the cup at the top a bit. 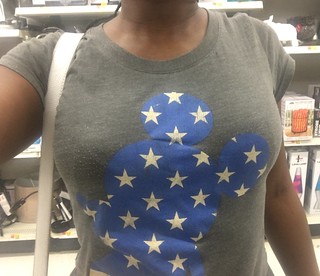 I rarely mention this on my bra reviews, but the seams wear only very slightly visible. I do want to mention that this bra is about 3/4s of an inch deeper than the peacoat Dessous longline that’s a sister size down (28F). 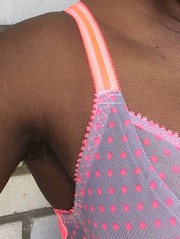 I think if you have narrow or sloping shoulders the straps will be too wide set for you, for me the straps are fine. The straps are fully adjustable. Although the straps look brighter/more neon in the pics, in person it’s the same color as the polka dots. 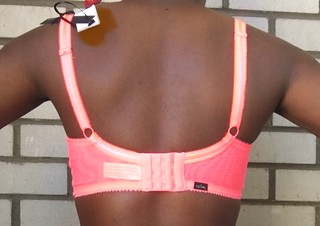 The band stretches to 28 inches before the wires start to distort. Stretched the band feels comfortable. The closure is 3×3, and it’s actually easy to button up from the back (I usually find the 5 row longlines to be a struggle to close behind my back, or som unhook when I get others hooked)

The longline is pretty short on this bra. There’s about 1 inch of extra fabric underneath the cups. There is 2 small bones, and the top of them keep ending up below the cups (but I don’t feel it), because there’s a space, the bone isn’t as long as the channel. Realistically speaking, the space is like 3 mm at the most.

These are unremarkable. They fit. There was a small amount of extra fabric in the front, but not enough that I would size down. The elastic wasn’t bothersome. They were comfortable. 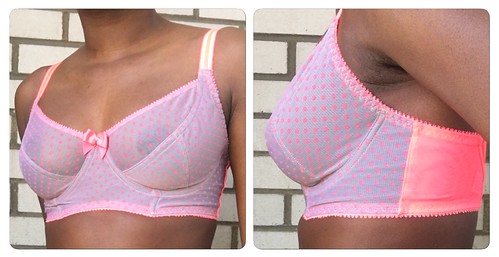 verdict: This is a bra that I’d wear on one of my longer days at work. It was actually very comfortable.

Do you own any of the Claudette Dessous longline bras?