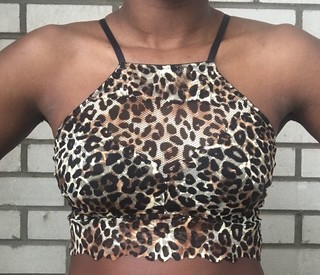 I bought this months ago, when VS was having a sale on bralettes. I know I said I wasn’t a bralette person, and I’m not, but the bralettes were $15 and I had a $10 off coupon, so after looking around their website for a while I decided to get this. It’s animal print. How couldn’t I get it? I did go back and forth between this and a jade green bralette (same style), but I figured since I already had 1 green VS bralette that I should get the leopard print instead. (I know the jade would have looked nice against my skin.) I had this in my bralette drawer for months, unworn, mainly because I forgot about it. I rarely look in that drawer.

I finally decided to wear it or day because I had a small pimple in my imf and a wire would sit right on it, irritating my skin. Whenever I get a pimple or something irritates my upper torso, I’ll wear a bralette instead of a bra for a few days. I wore this on my day off. 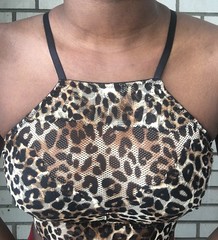 The straps are nice and thin. This thinned would probably be perfect *if* it wasn’t so stretchy. But since it was so thin and stretchy, it felt like it was digging in my skin, although it didn’t leave any marks.

This wasn’t a halter style, although it may appear that way from the front (when I tried googling this bralette I was only coming up with the halter version). The straps do cross in the back- most likely the cause of the digging in feeling. 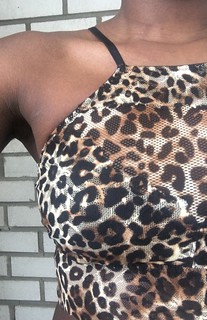 The ‘cup’ portion of the bralette is lined, so this could definitely work as a top- I’m thinking more of a clubbing top, but I do think it can be worn as a crop top during the summer.

When I was wearing this bralette, I did feel like my breasts were being smushed, but also when I walked I felt my breasts jiggle a bit. 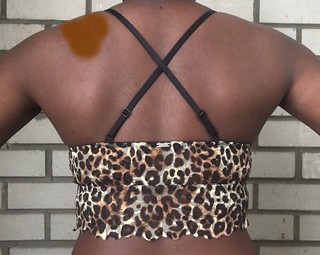 There is an elastic piece and that is the only firmness the band has. The band is the same material as the rest of the bralette, so I know if I were to wear this more than once before washing it would feel very loose. 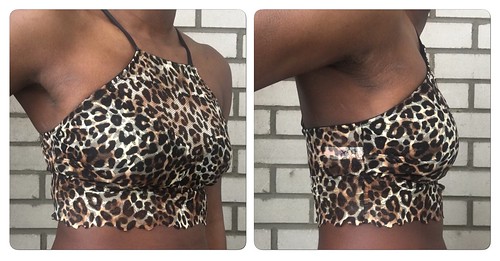 I really do like this bralette and I found myself looking for more, but VS doesn’t have this specific one, and the ones that they do have that are similar, are more than what I want to pay.