This is going to be a short review because I ended up returning the bra. So I won’t be able to comment on the way it fit, other than initially trying it on. 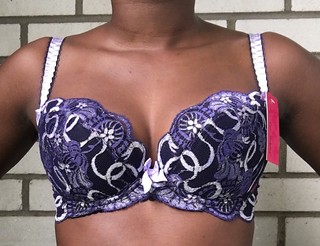 As stated in the title this bra is an exclusive to braobsessed. It was available as PL cut, with the thong or brief available also. I bought the panties, but I will review that when I review the bra I kept. The bra was available for $80 CAD, and the panties $25 CAD, so this wasn’t a cheap set, and I bought it as a spur of the moment purchase, because I only had 1 purple bra at the time. Had I thought it out more, I may not have bought it because I don’t particularly love the design. Braobsessed isn’t a place I buy from often because the prices are higher than buying direct (which is to be expected since companies need to make a profit), but also because 1- my size is rarely available, and it doesn’t make sense for me (in my mind) to pay more and wait the same amount of time, if not longer for an item (I’d have to wait for the order to be placed, and I think resellers place large orders few times a month). I personally liked to think that if resellers had more sizes, they sell, but what do I know? 2- Shipping. $15 shipping isn’t absurd, but shipping is slightly cheaper when ordering direct. However, the refund/exchange process was flawless (and I didn’t have to pay shipping on the exchange) 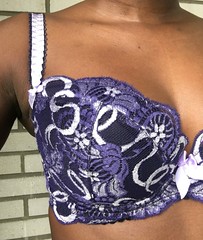 The cups on this bra were surprisingly too big for me. When I purchased this 65E was my go to size, so I was shocked to see how big it was on me. I initially thought it was me, but when I measured the depth and saw that it was 9 inches (22.86 cm), I knew it was cut bigger than any other 65E Ewa that I’ve owned. As far as I know a 9 inch depth if for a 65F cup. 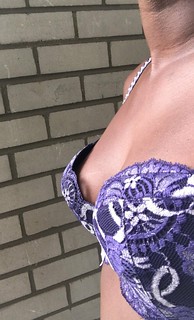 A lot of room in the cup

Not only was it too deep but the profile view was very pointed. Ewa’s bras are mostly known for giving breasts a basketall like appearance, and this was the complete opposite. So I was not too happy when I first tried this bra on. 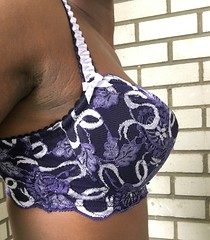 The band felt firm, and bordering on too tight. Stretched it was 28.5 inches (72.39 cm), which is my comfortable underbust mesurement. If this ra fit me better in the cups, I probably could have just used an extender until it stretched a bit more. 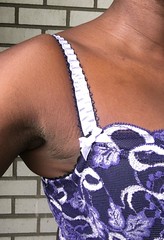 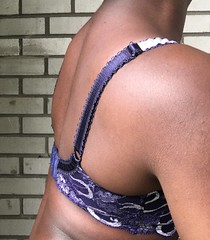 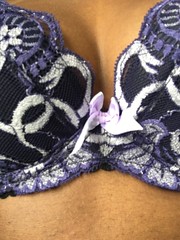 As I said, I didn’t really love this bra, and if I didn’t buy the matching panties, I would have just returned the bra. 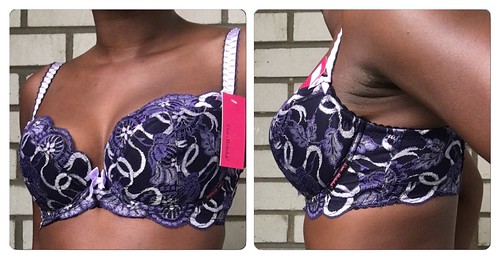 This blog post is going to be about how the fit of a bra changes when you remove the wires.

I will be using my Impimi Nicole bra, and the original review for that can be found here.

I chose this bra specifically because the wires are extremely painful for me. Literally when I put the bra on this morning the gore was stabbing me. I love the color of this bra, but it’s virtually unwearable with the wires.

What I did first was get the sharpest scissors I have and gently go back and forth with one end of the blade, against the wire channel above where the wire is. 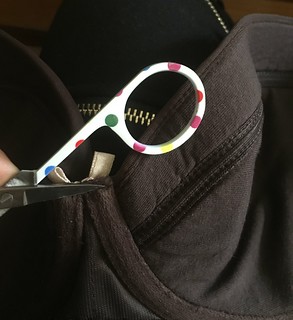 The wire didn’t slip out easily, so I had to use a little force. 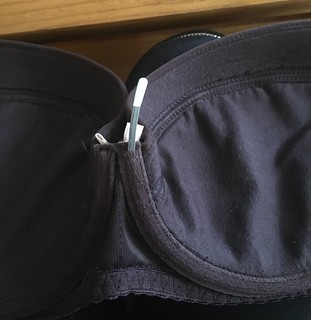 As you can see, the wires are definitely in a plunge shape.

Once I took the wires out, the cup immediately widened. 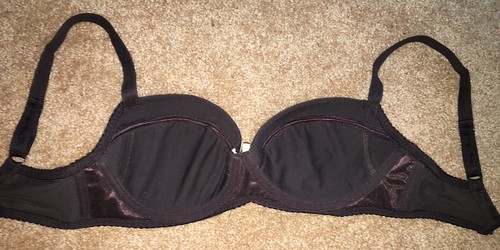 Left side has wire, right side does not. 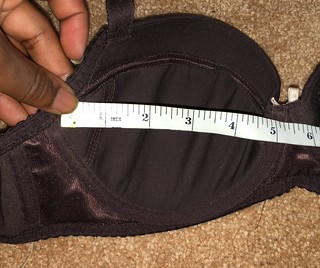 The width with the wire is about 5 inches 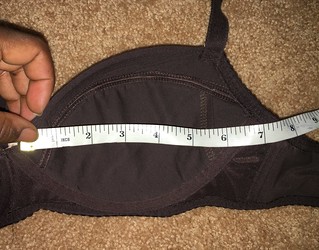 Without the wire the width is 6.5 inches

When putting the bra on after removing the wires I immediately felt a difference. For one, it was more comfortable, there was nothing stabbing me. With the wire removed there was nothing holding the cup into place, so on my bigger side the cup kind of collapsed. This bothered me very much. I found myself constantly touching my chest. It felt weird. 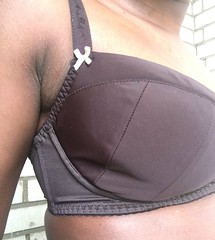 Here are some comparison pics 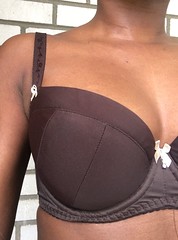 You can see the cup is too small (now) 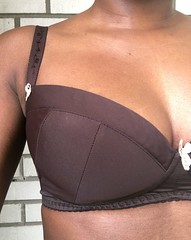 The cup looks a little lower without the wire. 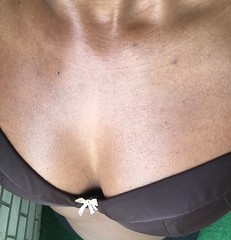 This bra felt somewhat like a padded bralette. I’m not sure if I mentioned this, but I hate bralettes.

I don’t know what I’m going to do with this bra. I can’t wear it with the wires, and I don’t like it without the wires. 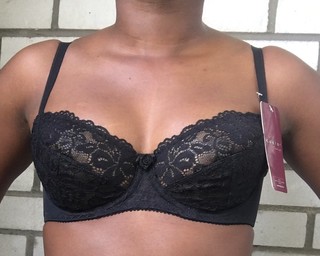 I thought I’d reviewed this a long time ago, but apparently I didn’t. The review is going to be how it currenly fits, not how it fit when I first got it. I believe the Kostar bras are the second set of unlined Polish bras that I ordered ( the first set being from Melissa Dessous). I initially wanted to try this bra, but I didn’t because it looked too much like Freya bras, and those don’t fit my shape. 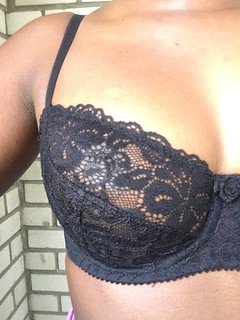 There is a funny thing going on with the cup. The bottom of the cup seems like it doesnt really have enough depth for me. When I first got this bra it seems like the cups were a little too small, but I don’t believe there was any quadding or cutting it, it was just too small. Today, the cups are really small. I bought this bra back in March. There’s a good amount of quadding, so this is definitely too small. 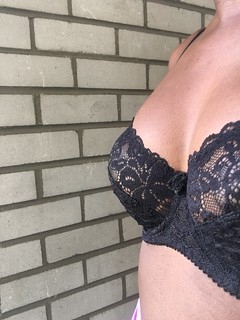 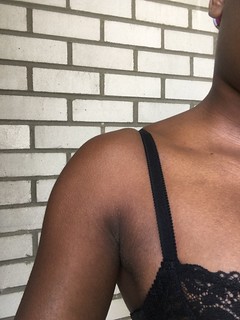 I love how thin the straps are. I wish all bras (in my size) had straps this thin. They’re a hair under half an inch, and very reminiscent to the straps on VS bras. I miss thin straps. Most DD+ bras have traps that are really thick, even in the smaller sizes. Although I love the thinness of the straps, they are very stretchy and elastic. Stretchy to the point where its annoying and they feel tight. With adjusting they’r either too tight or too loose, there’s no in between. 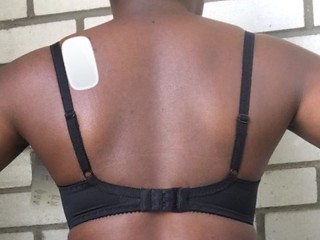 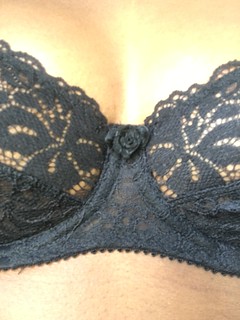 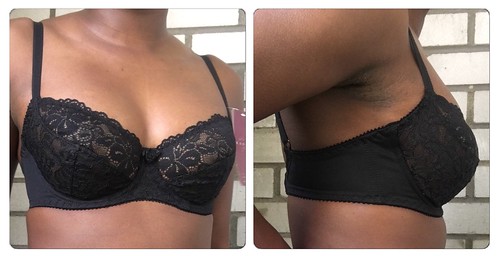 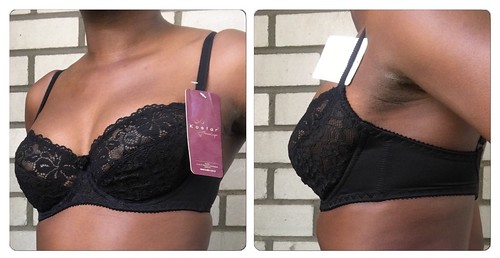 Wrinkling on my smaller side

You can can read my post on how to order fro Kostar here.