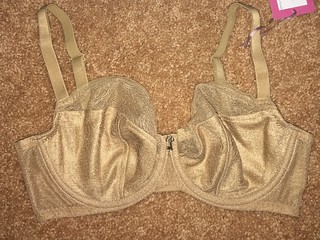 So… As you will see shortly, this bra is added on to my list of Polish (European) bras that don’t fit. I really wanted the Avocado bra to fit me, but I think I really need to try the RV cut before completely giving up on Avocado. There are a few bras in the RV style, but they’re all $68+ in a size that I wolud need. I’m not willing to pay that much, just to see if it will fit. I think I knew based on the description of this bra ( as well as the NF) that it/they wouldn’t work for my shape, or give me the shape I want.

I’ve wanted to try the Essentia bras for the longest, because I like that they’re a somewhat basic style. However, the issue I’ve had with Avocado, is that for whatever reason for the essentia bras pictured all show the model wearing the same bra. Not similar, it’s the same exact bra/picture. So you can’t really see how the bra fits.

The K style is mentioned as being: “Model medium built, with a more horizontal neckline and bust lifting harder than the classic model A”, and “Plunging demi-cup style with fantastic uplift” 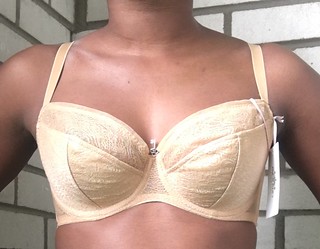 The band feels loose to me, but firm at the same time. Unstretched its 23.3 inches (59.18 cm), and stretched its 29 inches (73.66 cm). My comfortable underbust measurement is 28.5 inches (72.39 cm). So it’s about half an inch bigger than what I need. The band is a different material from the rest of the bra. It’s thicker (I don’t believe it was 2 pieces of fabric, but I didn’t check before I sent the bra back)

The cups are a complete fail on me. The one thing I can say about this bra, is that it is not FOT friendly. The very top of the cup is closed on top. However there’s some room in the cup above the horizontal seam. If I adjust the straps so that the band feels ‘tight’ then here’s less room, but if I adjust the straps to their longest, then there’s a lot of room. So I can’t size down because I’ll definitely get some cutting in/quadding. 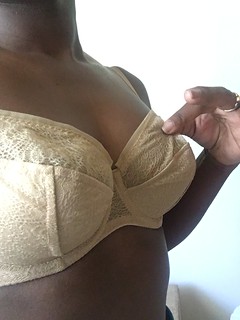 The space in the cups when the straps are adjusted to the longest length.

I don’t think there’s enough depth at the wire. And because of the ‘extreme’ bust lifting properties, this bra gives me a crazy cone/bullet like shape. Because of this, I don’t know who this bra woud fit. Won’t work on FOT (without some cutting in), won’t work on FOB because theres no depth at the wire. Probably wouldn’t work on shallow breasts, because there’s lot of apex projection. Maybe it would work best for even breasts? 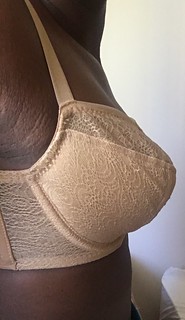 This picture has the best representation of how pointy the bra looked in person.

The sides of the cup come up rather high.

The straps feel very stretchy, and it almsot makes them feel like they’re to tight. But I am able to wear the bra with the straps adjusted a good amount. (However, that makes the sides feel really high.) The straps are also fully adjustable.

The gore is very high on me, and it pokes. It definitely feels pokey even being worn for a short amount of time.

I don’t have additional pictures of the bra because I initially wasn’t planning on returning the bra. I thought to myself “I’ll just keep it because it’s an ‘okay’ bra” but then I remembered that I paid $40 for each bra and realized if I paid that much for an “okay” bra from Amazon, I’d return it without a second thought. I did debate on whether or not to sell the bra, but I don’t think anyone would buy such a ‘basic’ bra for $40. A lot of the Avocado bras I see on bratabase are a lot more fancy, and they’re selling for around $30-$40. Plus with how Ill-fitting the bra is on me, I can see this bra not being sold for a while. 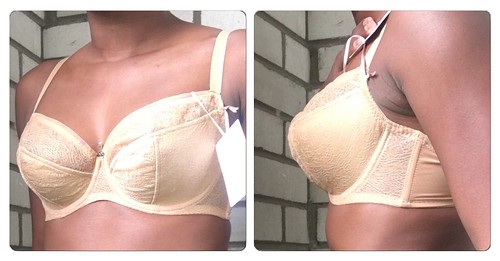