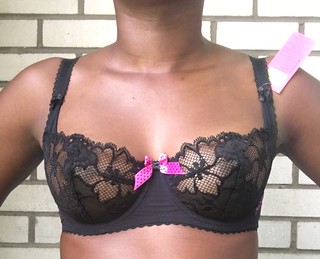 I bought this bra, because 1 I love the way it looks, and 2 because I wanted to try an unlined Ewa bra. I kept going back and forth on what size to get, because there wasn’t a lot of info on unlined bras in my size, as well as a lot of info for this bra in particular. I ended up going with 65DD, because I figured if it was too small it could be a “sexy time” bra. However, even though I sized down, it was still too big. 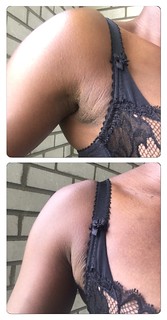 The straps are wide set. Actually, too wide for me. I tried this bra on a few times (for mere seconds/less than 5 minutes), and everytime it felt uncomfortable. My shoulders aren’t particularly narrow, so that something to keep in mind if you are interested in this bra. 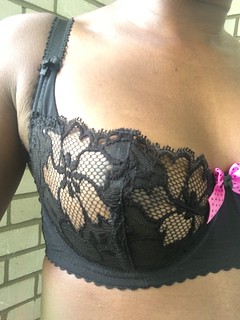 When I bought this bra, there were only 2 other people that had owned this bra, and they were both nice enough to measure their bras. Both of them listed the depth as being around 8.1 inches (20.57 cm), with a width of 4.9 inches (12.45 cm). Those 2 measurements work out for me, with the depth possibly being too small. Well, with the bra I received, the depth was 9 inches (22.86 cm), which is too deep for me. 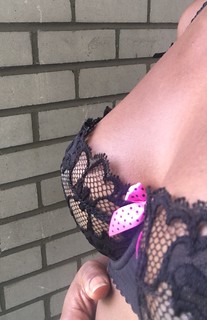 The top of the cup is also open. It’s not like other unlined halfcups that have an elastic piece that goes across the top. There is space between my breast and the top of the cup. I think because the straps are set so far apart, the sides of the cup come up high on me, and irritate my skin. 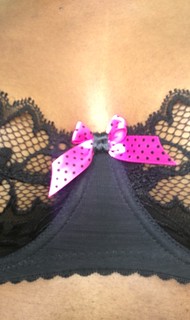 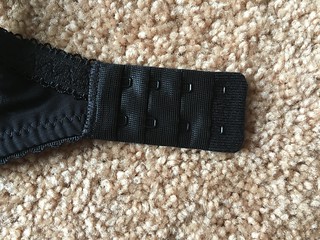 The band is TTS, and firm. Sizing up wasn’t necessary (thankfully since that wasn’t something that crossed my mind). The band does stretch to 30 inches (76.2 cm). The band has 4 rows of ‘eyes’ (I do find it interesting that some of my Ewa bras have 3 and some have 4)

I like the way this bra looks (just not on me), and while I would like to reorder it in a smaller cup size, with my luck the band would run small. I also don’t think I have the breasts for unlined halfcups. I haven’t come across one unlined halfcup that I love yet. They all seem to emphasize my natural shape instead of providing some sort of uplift.