I’m going to write what it was like for me to order from Comexim directly.

I often browsed Comexim’s site (as I’m doing now), looking for some bras to buy because apparently I don’t have enough. 😐

I think I initially put about 5 bras in my cart (Mystic, Tropical Garden, Eris, Pantera and Rita). I ended up actually purchasing two (Eris and Mystic). I ordered both with reduced gores, and was emailed letting me know that reduced gores makes it a custom bra, and it would no longer be returnable. I wanted to try a non custom bra for my 1st order, so I could see how the bras would fit me. But I liked the idea of having a lowered gore.

When I made my order I accidentally ordered a 65E mystic and a 65F Eris. When I realized I ordered two different sizes, I sent a message in the comments box. And hoped for the best.

I placed my order April 2nd (US) here is a screenshot of the email I received after placing my order: 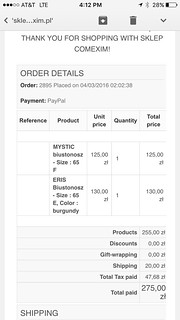 I want you all to really look at this picture, because I am going to discuss a part of it.

Mystic was 125pln, and Eris was 130pln which adds up to 255pln. We are not going to pay attention to the shipping because it’s not important. What we are going to pay attention to is the line directly above where it says “total paid”. We are going to look at where it says “total tax paid”. The total amount of tax that I paid for these two bras is 47,68pln (which comes to almost $12). The tax is about 21% of the total of the 2 bras.

The reason I bring this up is because a lot of people say they don’t like buying from Ewa because she charges tax. Well in case you didn’t know you are also getting charged tax from Comexim.

{Tangent} Back when I worked in retail, I had a lot of customers that were tourists. They would almost always be confused when they were buying an item (let’s say for $24.99), but paying more than what the advertised price was (26.02). And I’d say, ‘It’s $24.99 plus tax‘. And they’d oftentimes say ‘in my country the taxes are included in the price’ or something along those lines. Most people didn’t like it, because it seemed like we were dishonest about the price. Which is understandable. If you only have $25 in your pocket, you wouldn’t have enough money. What they do in other countries (as it pertains to tax) makes a lot of sense. You know upfront how much you’re paying. If the sign says 200pln (or zł) you would know you’re not going to pay anything more than that.

So after thinking about this it dawned on me. Whenever ‘we’ (Americans) buy abroad, we will be paying their taxes (VAT). The only way we won’t be paying VAT is if we are actually in the country and getting on a plane and can get our money back that way. (Well we won’t be paying taxes if we buy from someone on bratabase).

So when I made this known, I was told that I should contact Comexim and get the refund because I shouldn’t be charged tax (because I don’t live in that Country).

I did email Comexim asking if they refund the tax because I don’t live in Poland aaaaaannnnnnddddddd I never received a response. 😑 Not a “yes we can do that”, not a “no the tax comes up automatically”. No response at all. So I let it go. Should I have followed up? Maybe. But I didn’t. But just so you know, when I emailed them letting them know that I needed to change the size (because I ordered 2 different sizes) they didn’t respond to that email either.
By April 23rd I hadn’t gotten any sort of confirmation about my order, so I emailed and asked if I could add a pair of panties to my order. 2 days later they responded and said I could send the 47,00pln to their Paypal and they would add it. When I sent payment I did put my order number in the notes section to be on the safe side.

5 days later (April 30th) I received an email notification saying that my package was shipped. 🎉🎉🎉

My package was out for delivery May 5th. I was off, and at my parents house (where I get my packages delivered) and I didn’t hear the mailman knock. 😔  The package was sent requiring a signature. So the mailman left a little slip at my parents door saying I could pick up my package (and sign for it) at the post office the next day at 9am. Only problem was I worked the next day 8-4 post office closes at 4. I worked Saturday and then all day Monday and Tuesday (11 hour shifts) so at the earliest u wouldn’t be able to pick it up until Wednesday. Which was almost a week later. Thankfully my mom was able to pick it up. I wasn’t sure if she would be able to because it had my name on it. But she was. 😀

I know a lof of some comment about how padded bras are shipped, so I thought I’d include photos of my comexim packages 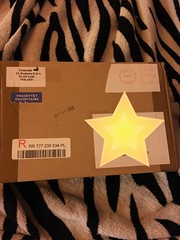 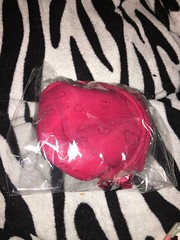 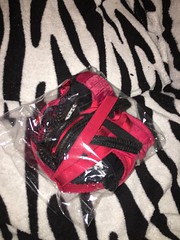 My second order I ordered: The basic in black 65G w/ reduced cups and gore, straps moved in & no bows; Tropical Garden 70G w/ straps moved in, cups reduced, and overlapping gore, no bows; Burgundy half cup 65G w/ reduced gore & cups & straps moved in.  After I placed that order, I noticed there was a 75D Jacqueline bra for sale, which is a sister size to 65F (since comexim doesn’t do DD), so I emailed and asked if they would shorten the band so the bra would essentially be 65F. They said they would. They did email me to ask what I meant by ‘straps moved in’ and ‘no bows’. So  I sent my request back to them all in polish! and for the noes I sent a picture with the bows crossed off. I don’t believe the cup was reduced on the TG (cups  are too tall), and I don’t believe the gore was reduced on the burgundy halfcup, but there wasn’t any bows on the basic, tropical garden, and only one bow on the Jacqueline (which I didn’t request there be no bows) 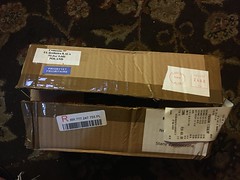 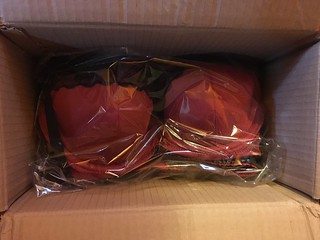 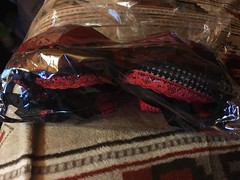 As you can see the bras are packaged better. They’re one on top if the other, instead of folded into each other

Third order, I ordered the new snake bra 65G, Eris 65G, and tropical Garden 70F all as 3HCs. I put in another comment saying “If possible please move straps in 2cm, reduce cup height and reduce the gore” I think those are ‘nice alterations’ but since I don’t know if they were done on my previous bras, I can do without them.

This order was placed June 24th , shipped July 13th, and miraculously delivered July 21st (I say this was a miracle because I was going on vacation and the mail was supposed to be held from the 21st until the 25th, but somehow the mailman missed that, and still delivered it the 21st. I just so happened to still be at my arenas house when the mailman came– there were a few delays so we ended up leaving a little late for our vacation. But luckily I got to wear my bras on vacation) 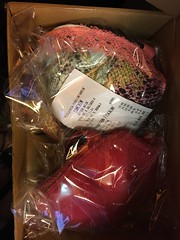 The tropical garden is below the Eris. 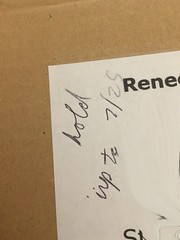 I do want to mention that when you ask for alterations on bras they may or may not get done. For example: I ordered the burgundy directly from Comexim, and I ordered an Annika from Zathiya. I asked for a reduced gore with both. The gore on the Annika was definitely reduced (it’s 2.25″ -6cm) whereas the burgundy is 2.6″ -7cm. I can wear Comexim unaltered with no issues.

One thought on “Ordering from Comexim”