Now, I know I said I was going on a bra hiatus not too long ago. But obviously I lied. I didn’t lie intentionally, I really planned on not buying anymore bras. But sales happen. I see things that I want (houndstooth). I have no willpower. Lol. Today, I bought 6 bras and one matching panty. 😕 Granted, three of the bras (and I assume the panties) can be returned.

Last week I bought two bras from Poland Melissa Dessous. I’m really hoping to get them tomorrow- because on abtf someone said they received their order a week after they placed it. But I’ve never ordered from Poland, so I don’t know how long an in stock item takes. 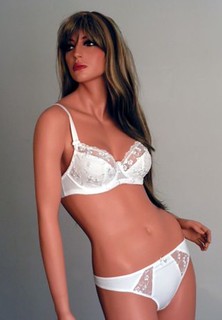 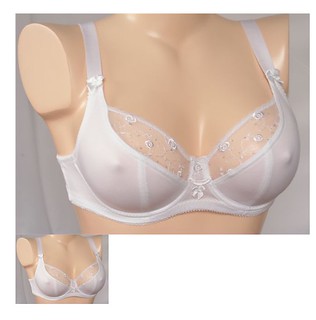 And of course I ordered the houndstooth bra from Japan (that only took four days).

Freya Doodle 32D. <sigh> I really hope it fits. It’s 2 sister sizes up and it’s Freya so the band will most likely run big (everything I’ve read said they run big, but the 28s I have are right on me, and the 30s are fine). I’m figuring if it looks really bad, I’ll just return it. One of the reviews I read said that this bra gives the pointiest shape Freya has ever made. 😔 So as I see it, with this bra there’s two issues 1) the stretchiness of the band–which I plan on taking in to make it fit. 2) possibly the wire. I’m thinking it may be a little past my root? If it is I can fix that by bending the wire inward, which would also help with the band. But it’ll make the bra deeper. But I’m thinking of the wires are wider than it’ll take off some of the pointiness.  But since the bra is a sister size the wires should be be the same length. 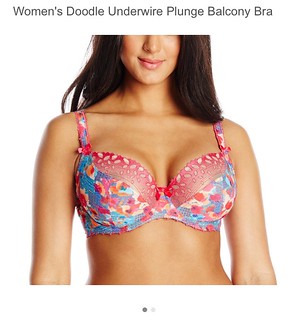 **fingers crossed that this fits**

Curvy Kate Dreamcatcher 28E. This bra will probably be my last fortay into CK bras. The two 28Es I got from bras too were both fails, one too big, one too small. I’m actually wearing the Princess/Portia hybrid with an extender right now. This bra wasnt that cheap (I had some $14 bras in my cart), but considering the regular price is $60+ $19 isn’t a bad price. I am expecting to return this. I almost didn’t get it, but it was the last one, but with free shipping and returns- I saw no reason not to. 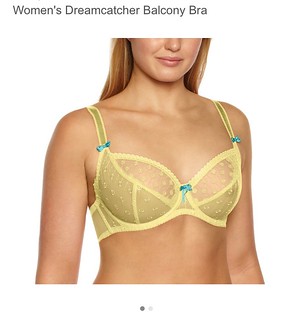 Freya Instinct 28E. The 30DD I have doesn’t ft as good as it could. So when I saw this so cheap I decided to get it. I haven’t done the review for the 30DD yet, but essentially for me to get a good fit in the cup I have to have the strap adjusters all the way on the top of my shoulders- on my clavicle. But when I have it adjusted so tight, it hurts & digs in. And it’s pointy. The band is okay, but when I have it adjusted to high it roses up. One issue I have with the instinct in 28E, is when I first put it in my cart it was showing the soft cup version. But this morning it was showing the padded version. So the padded version is what I bought, but I’ve already decided padded seamed bras don’t look right on me. But maybe this will look better since it’s a half cup. 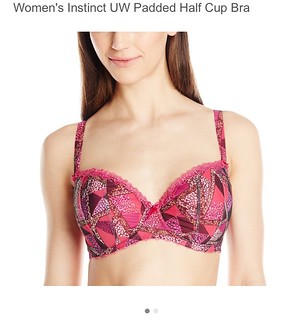 I bought the matching panties. Which, I know was relatively pointless if I return this bra, and end up selling the 30DD, because then I won’t have a set anymore. But it was cheap- compared to the regular price. I like to get my panties from VS during the 8/$27 or 7/$27 deal, or when they have them for $3.99. I have a drawer full of panties, so I don’t actually need the matching panties. 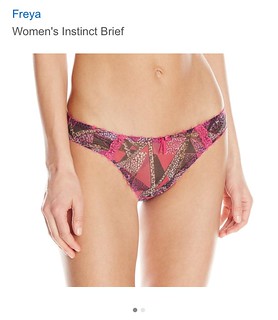 I got a Cleo Meg in 28E from poshmark. I’m hoping it fits and it looks nice. The other Cleo Meg I had was a 30D, so this is going to be 1 cup size up from that. I’m sure there is going to be space at the top- all of my cleos have that. 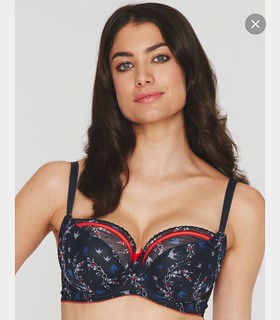 The last two bras I got from Groupon. A bratabaser made a post saying that groupon was selling 2 bra sets of parfait bras. So I got the one that wasn’t padded. I looked up the reviews on bratabaser and they weren’t many. There was measurements, but I’m not sure how they got them because no one has own those bras (in 30DD-which is the size I bought). 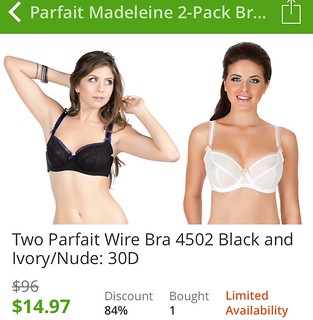