This isn’t going to be a review per se, but it’ll be as close to one as I can get because I don’t own this bra anymore.

I bought this from The Lingerie Store back in July for about $15+ shipping. Now if something’s sounds too good to be true, it probably is…. When I received the bra, I saw that it had about 3 brown stains. I have no idea what the stains were, but it went through the fabric, so I had a feeling it probably wouldn’t wash out. I quickly called the store to see what I could do. I didn’t just want to return it and have time think the stain came from me/my house. I spoke to Amber and she was really nice about it. She told me to mail it back, and they would refund me the full amount that I paid. They refunded me quickly.

i wasn’t sure what they were going to do with the bra, and I hoped they didn’t sell it. But as of now. I can see the bra is still on there site, so beware, if you buy it, it will have stains in it. That’s probably why the bra was so cheap when I bought it. 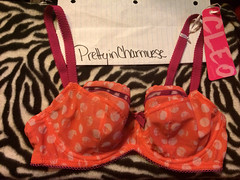 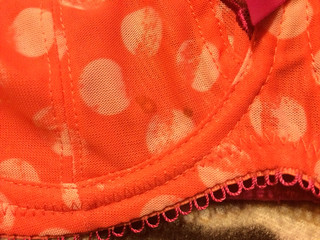 A few things I remember about the fit of this bra

I had the straps at the longest setting, and they still felt like they were digging in. Something I’d never felt before when I was wearing the incorrect size.

This bra, as with all of the other cleo bras I have, had an effect of pushing all of my breasts to the center of my chest. Sounds good in theory, and may be what women with bigger breasts want. But on me, it just made me look smaller. When I looked at myself from the front (especially with a shirt on), I was like, geez where did my breasts go? 😨’ Actually, I think the only cleo soft bra that doesn’t do that is the Lucy. I am used to having an hourglass shape, albeit a slim one. With this bra (and the Maya & Minnie) I look like a (slim) pear shape. While neither shape is bad, I prefer to make my breasts look bigger rather than smaller. Bigger without the use of padding/molding. 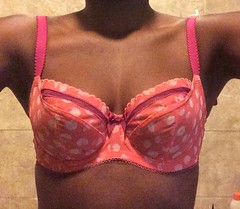 The cups felt simultaneously too big and too small. Too small because I believe I had some side boob escaping– it was lower than what I’d been used to. Too big because there was some gapping, and wrinkling   In the upper part of the cup, but not directly at the top- basically where the purple strip of fabric was.

I have both of these pictures in my gallery, and I didn’t take notes on the actual fit, so I assume one before S&S’ing, and one is after. 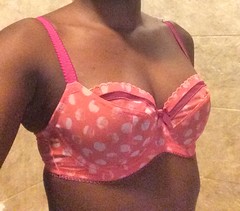 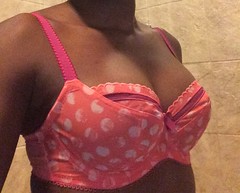 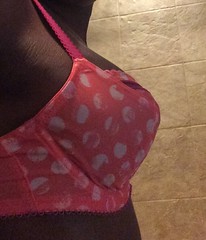 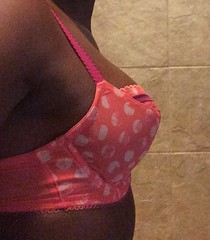 Gapping at the top when arms are raised.