Like all of the dessous Bras from Love. Claudette, this bra is made of sheer mesh. This particular bra, is a very stretchy mesh. Too stretchy actually. 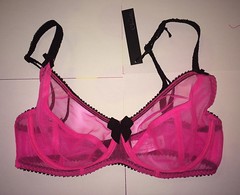 The bra is a brighter pink than what I was expecting.

The top of the cup is one layer of fabric, while the bottom is lined. 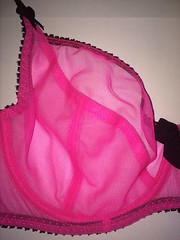 There is a black ribbon bow at the center gore. 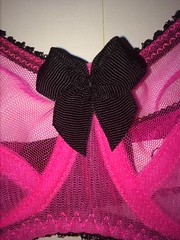 As well as where the straps meet the cup 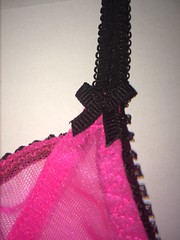 Around the bra, there is black frilly detailing. 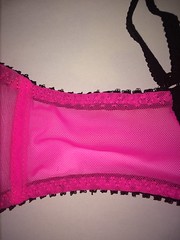 The band on this bra is so stretchy. Its not big per se, but it’s just very stretchy. Stretchy enough, that if I had bigger breasts that needed support, I don’t think I would get it unless I sized down. I would have sized down in the band, if Claudette had a 28 available in this particular bra, but they didn’t. As I predicted, the cups are tall- tallest gain what I’d like. I do however, think that I have a tall root. That is, I believe my breast tissue starts at a higher point than on some people. There is some room in the cups, but not enough to size down comfortably, in my opinion. 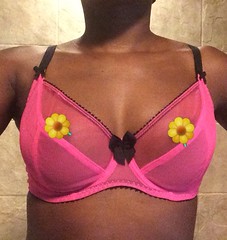 As you can see, there’s some wrinkling in the cup on my smaller breast. 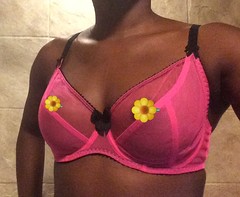 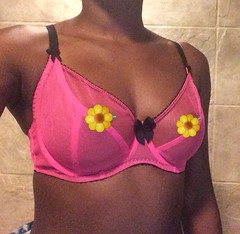 The gore tacks at the top, 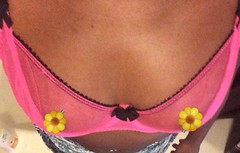 But not at the bottom. I’m not entirely sure why that is, but I suspect it’s because the band is so stretchy. 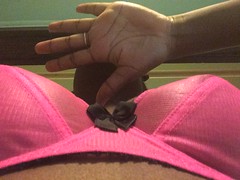 The side view is okay. Slightly pointy, but not too much. 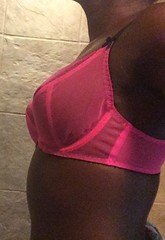 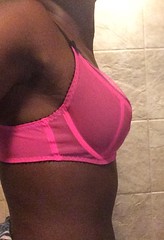 As with basically all the Claudette bras, except cool cotton, my nipples are above the apex of the bra. This bra is cute, but I don’t love it. It is going to be a bra, that if I keep, I’ll definitely have to alter the band someway. I think if I alter the band, the cups won’t have so much wrinkling in them. I do however wish the cups weren’t so tall. I’ve been wondering, if I got a different size, would I be able to have smaller cups. The size I was thinking, was either a 32C, or a 32D. I think to get a cup as low as it is on the models, I’d need a bra that I’d have to adjust the straps as long as they could go or close to it.

I kind of wish I’d bought one of these 30E Dessous bras in a 30DD, so that I could compare it to the Dessous Sucre, and also, so I could see if the cup size dictates the stretch ones of the band.