About the bra: This is a very cute bra. I originally wanted the leopard with the pink, but that wasn’t available in any of the sizes I would want to try. The whole bra is made from a (very) stretchy mesh fabric. 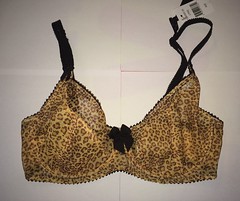 There is a black bow made of ribbon on the gore 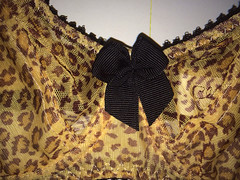 There is also a cute little bow where the straps meet the cup. 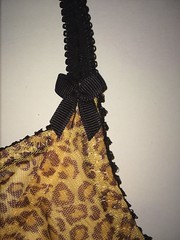 A majority of the bra is leopard print mesh. 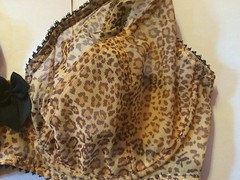 w/o the flash so you can see the true color. 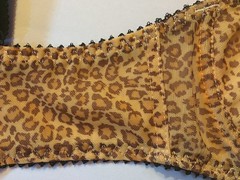 The lower portion of the cup is double lined, the inner lining is a beige color. 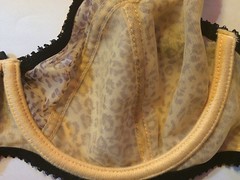 There is a cute little frilly design going around the bra. 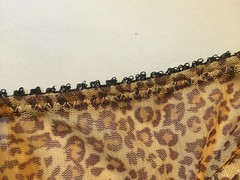 I’m not particularly in love with this bra. It’s cute, but it doesn’t fit me correctly. The biggest issue is that the band is too big. On my bigger breast, I can tighten the strap so that the metal piece is almost touching my clavicle/top of my shoulder. Doing so makes the bra look very nice, but it’s hurting my shoulder. I                   do, however plan on tightening the band, although I’m not sure which method I am going to use.

I went with the 30E for this bra, because when I read other reviews, a lot of women said it ran a cup size small. I do agree with that. I think if I had went with a 30DD, it would have been too small. The band may have been tighter, but I’d have some quadding on my bigger breast. I would have preferred this bra in. A 28 band, but love Claudette didn’t have this bra in 28 bands. If it came in a 28 band, I’d have had to debate about getting the 28E or the 28F, and I probably would have went with a 28E, because I don’t think an F cup would fit me.

As it is, the bra is ‘cute’. It doesn’t fit the way it looks in pictures/ the way I wanted it to look, but I knew that was going to happen. The cups come up a lot higher than I want them to. It essentially looks like the full coverage bra it’s described as. 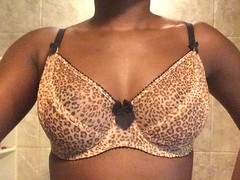 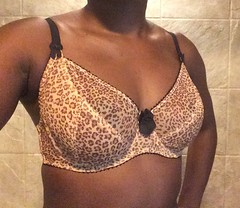 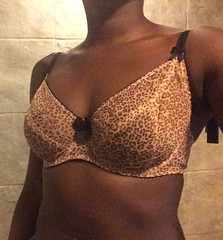 Side view: As you can’t ell from these pics, the apex of the bra is not in the same place as the apex of my breast. 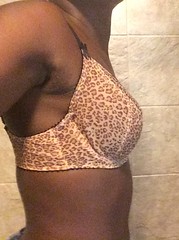 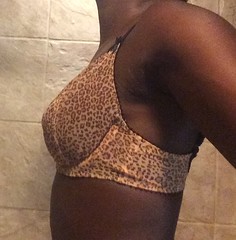 Because the band is big, the bottom of the gore doesn’t tack correctly, and there’s some space. 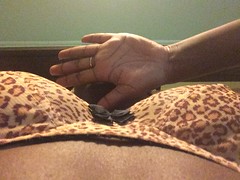 But it tacks at the top. 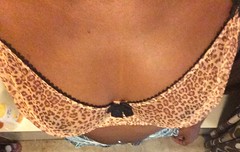 When I lean over, there’s a good amount of wrinkling. 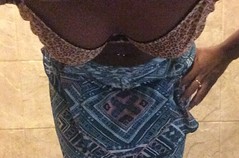 The sides of the cup, that connects the band to the straps, is a little on the high side. 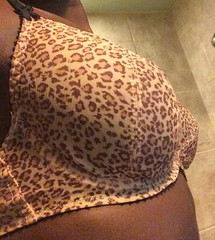 As I’ve said,this bra is cute. It’s not the best, and it’s going to require some alterations to get it close to being perfect. I almost want to attempt to turn it into a balconette. But I feel for something like that, I’d have to break out my sewing machine, and I’m still in summer mode. Plus I have to see how the cups fit once I tighten the band. I’m thinking the cups would fit a lot better, with less space (there’s not a lot when I’m standing regular), but I also think it’ll made the sides of the bra cut in more, since it’ll be farther to the back.

it is worth mentioning that the cups on this bra are all mesh, stretch mesh. On my skin it’s rather irritating, but this is just from trying it on, not actually wearing it around. I think it’ll get less irritating as you wear the bra, as well as when you wash it.